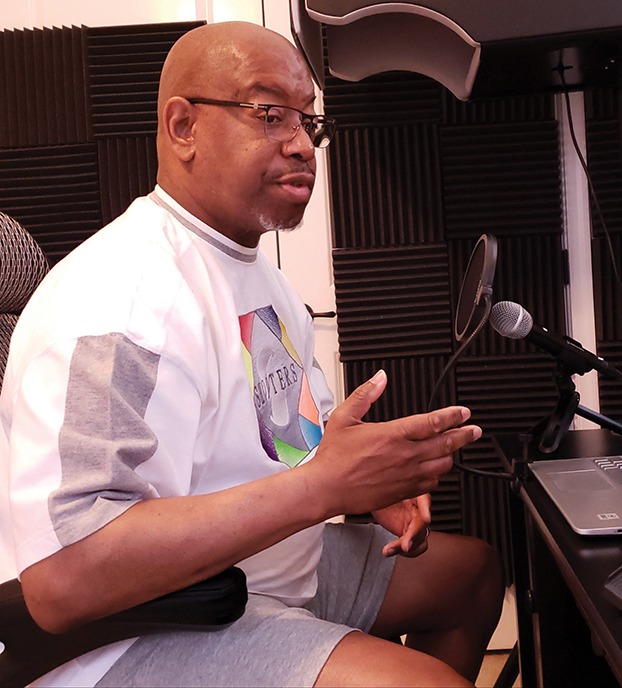 Vincent Eury, who recently launched a career as a voice actor, records a demo in his home studio. Photo submitted.

SALISBURY — After moving to Salisbury from New York at the age of 7, Vincent Eury was desperate to fit in.

Boasting a thick New York accent the likes of which many of his peers had never heard, that was a tall order. Through trial and error, Eury eventually developed an effective strategy.

“I gotta say that I was a little silly and I told a lot of jokes and I made people laugh to get people to stop picking with me,” Eury said. “It seemed to have worked.”

During choir class one day in middle school, Eury was up to his typical class clown tricks.

“Mrs. Morrison was trying to teach a song and I was being really silly and really loud in the back,” Eury said.

His standup show was interrupted by the teacher, who called him down to the front of the class.

“She said, ‘Vince, if you want to be heard, you come up front with me,’” Eury said. “Everybody was like ‘Oh, you’re in trouble.’ I took the walk of death to the front of the class.”

She brought him in front of his classmates and instructed him to sing a simple song as she strummed the guitar. At first, his singing prompted raucous laughter. It didn’t last long.

“The laughs came down to a whisper and everybody was engaged in what I was doing,” Eury said. “Mrs. Morrison’s mouth was wide open. She couldn’t believe what was coming out of my mouth.”

That’s when Eury knew his voice was special.

Since that moment, Eury has followed his special talent through life. It’s taken him to special places, including far off countries where he’s sung for foreign diplomats as well as the Lincoln Center, where he performed for Barack Obama’s inauguration.

No matter where Eury’s talent for singing has led him, he’s always looked back fondly on his days in Salisbury — the place he found his voice.

“I wouldn’t be who or where I am today without people looking out for me and it’s based right there in Salisbury,” Eury said. “… I’m proud to represent my town. Of course I was born in New York, but Salisbury is my home.”

After discovering his vocal abilities in middle school, Eury continued to pursue music through his academic career, first at Salisbury High School where he was a member of the choir and then at Pfeiffer University, where he studied music education. He credits Mrs. Morrison, Cynthia Pribble, Dr. Richard Brewer, Charles Key and several others with helping him identify and nurture his vocal talent. 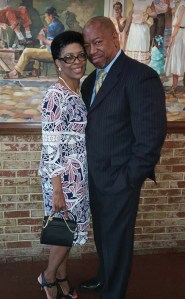 Eury was poised for a career in the music industry when he graduated from college, but he suddenly felt a different calling.

“I came home and there was a burning desire for me to join the military, so I ended up joining the military at the age of 24,” Eury said.

Eury’s musical endeavors were initially put on hold when he joined the Navy, but his voice still found a way to shine through. One day, while cleaning a ship’s quarters in Annapolis, Maryland, prior to an inspection from an admiral, Eury was caught belting out notes.

“I was in a space where the acoustics were amazing,” Eury said. “I was singing Mona Lisa by Nat King Cole and then I saw this shadow behind me and I turned around. There he was — the admiral.”

Eury said he immediately “came to attention,” but the admiral told him to keep singing.

Instead of being reprimanded, Eury was given an over-the-phone audition to be a part of the Navy Band. The band director was impressed with what he heard over the phone and soon Eury was headed to Newport, Rhode Island, to join the band as a vocalist.

The next six years, Eury said, were the greatest of his life.

“We were singing for foreign dignitaries, the opening of football games, high school concerts to aid in recruiting,” Eury said. “We traveled everywhere: Iceland, London, Vienna, Austria, just performing and doing what you love.”

“Out of that unit, I performed over 600 full honors funerals in Arlington Cemetery, Quantico Cemetery as well for veterans of war, veterans in general, those who served and passed away,” Eury said. “We did 600 (funerals) in a two year span. It’s a very emotional time, but it’s also very honorable and I was proud to do it.”

In 1999, Eury left the Navy and went to work at the Department of Health and Human services in Washington, D.C., where he’s been employed ever since. All along, he’s maintained a singing career on the side.

For a time, Eury was a member of the Patrick Lundy’s Ministers of Music gospel choir, which allowed him to perform at several special functions, including a celebration at the Lincoln Center for President Obama’s inauguration.

“It’s historical and I was a part of it, so it comes off the top as one of the best things I’ve done musically,” Eury said.

During his time with the Ministers of Music, Eury brushed shoulders with several celebrities, including Lou Dobbs, Tom Selleck and musical performers like Jamie Foxx and Bruce Springsteen. 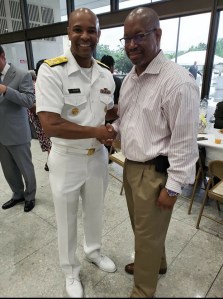 Eury has also teamed up with the Unified Jazz Ensemble in Annapolis, Maryland, to record several smooth, soulful tracks.

Despite those musical successes, Eury said people have continued to tell him that he needs to “do something” with his voice. Always looking for the next adventure, Eury decided to heed that advice by launching a career as a voice actor.

In a home studio that his wife, Robin, helped him build, Eury conducts virtual lessons with his Luxembourg-based voice coach J. Michael Collins. Eury wakes up in the wee hours of the morning for their sessions.

“Our times don’t match up, so at two, three, four or five in the morning, if I have to get up and get it done, that’s what I’m going to do,” Eury said. “It proves how passionate I am.”

Eury said he’s “all in” on being a voice actor, so much so that he can’t help but practice when watching TV.

Eury has already recorded a few demo tracks and hopes to land his first gig soon. He’s angling to even do a few Navy commercials, so his voice will once again be associated with America’s maritime force.

Eury currently lives in Northern Virginia with Robin, who is the director of Howard University’s speech and hearing clinic, but said he still tries to get back to Salisbury as much as possible to visit and care for his mother.

More information about Eury can be found online at www.vinceeuryvo.com or by emailing him at thejazzsinga@gmail.com.