Spirit of Rowan: Whitney Wallace-Williams fueled by ‘innate desire to fight for the underdog’ 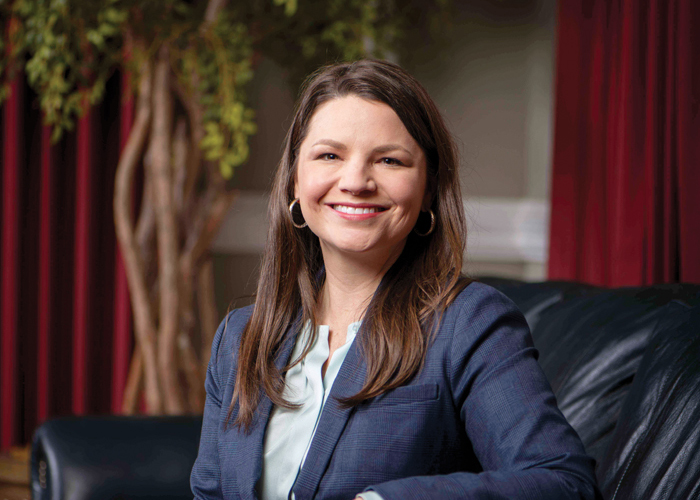 Whitney Wallace is a partner in the Salisbury based Wallace and Graham law firm that was started by Mona Lisa Wallace in 1981. Salisbury NC 2/11/21 JON C LAKEY/FOR THE SALISBURY POST.

From her work with a decades-old law firm and downtown leadership positions to her family’s generous financial contributions to charity and the newly established cancer center, local attorney Whitney Wallace-Williams draws her inspiration from her innate desire to help people.

Wallace-Williams, 39, spent a decade away from home, which included her time at UNC-Chapel Hill, where she obtained a sociology degree in 2004, and Wake Forest University School of Law. She spent a year in Austin, Texas, and even spent some time in France. While in Austin, Wallace-Williams worked at a consumer advocacy organization fighting on behalf of wronged customers.

But she attributes her loyalty to Salisbury, where both sides of her family reside, as the reason she returned and joined the Wallace & Graham law firm in 2008. The firm, founded in 1981 by her mother, Mona Lisa Wallace, addresses litigation across the globe, ranging from worker’s compensation issues to civil cases.

“I grew to realize that Salisbury has everything I need in order to live a fulfilling life: close family connections, the best friends I could ever ask for, a challenging and rewarding career that helps others and a community that I love and feel passionate about,” she said.

Recently, Wallace-Williams joined her mother and Bill Graham by becoming a junior partner at the firm. Her most recent cases have been related to worker’s compensation and civil litigation. Some of Wallace-Williams’ cases have made their way to the North Carolina Industrial Commission, in addition to briefs and arguments made in the North Carolina Court of Appeals and Supreme Court.

Though Wallace-Williams questioned in college which career path would allow her to help people — with personality tests suggesting she be a social worker — joining her parents with a career in law seemed like the natural fit.

“I have an innate desire to fight for the underdog,” Wallace-Williams said. “It’s a natural fit for me because I’m allowed to naturally do what I’m inclined to anyway.”

Wallace-Williams said there are too many cases and clients to name who, over the years, have made a special impact. But gestures such as breakfast and lunch deliveries to the firm, surprise homemade gifts and hugs from clients serve as rewarding reminders of the lives she’s been able to touch. Additionally, Wallace-Williams said she enjoys being able to tell her clients to relax and allow her to “do all the worrying and hard work for them.”

She’s the mother to Annie, 7, and Ella, 4, and wife to Brannon Williams, a U.S. Army Special Forces veteran from Georgia. The running joke in her household, she said, is that her only hobby is community activism. That’s evident with the many hats she wears.

In addition to her work at the firm, Wallace-Williams has also dedicated her time to various local boards and commissions. She’s been a prominent figure on the Downtown Salisbury Inc. Board since 2015, the Empire Hotel Redevelopment Task Force, the Economic Development Committee and an ongoing downtown beautification project called “Paint the Pavement.”

In addition to their work at the firm, the Wallace and Graham family have contributed funds to the ongoing Bell Tower Green Park project and had a new cancer center with Novant Health named in their honor due to a substantial donation. The Wallace Cancer Center is a 32,000-square-foot-facility that now allows Novant to serve patients locally rather than referring patients to other locations for certain cancer-related treatments.

And with the “Wallace & Graham Gives” program that started in 2020, the family has since provided tens of thousands of dollars to local businesses, frontline workers, local families and the homeless population due to the impact of the pandemic. One arm of the program also provides annually a total of $15,000 in scholarships to six Rowan County high school seniors.

Though the contributions have made a lasting impact on the community, Wallace-Williams said volunteering has given her much in return, including both personal and professional growth. Her favorite part of volunteering is the building of friendships and relationship along the way. Wallace-Williams said she loves the passion among residents of Salisbury, and she’s inspired to serve by her belief in the city.

“I love the intimacy and camaraderie we share living in a small community,” she said. “There are opportunities to make a difference here if someone chooses.”

Spirit of Rowan: Jenny Lee is working toward a…