Spirit of Rowan: The toast of Salisbury: Andy Maben’s rise from home brewer to beer master 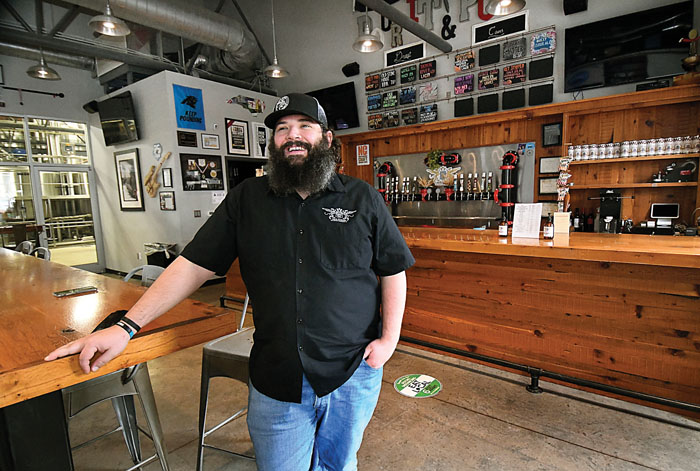 The next time a patron at New Sarum Brewery raises a glass of beer, they might want to toast the Carolina Panthers.

Without Charlotte’s NFL team, the founder of one of Salisbury’s premier breweries might not have come to the Tar Heel state.

Even though Andy Maben, 38, grew up in a household that loved the Buffalo Bills and Pittsburgh Steelers, he switched loyalties to the Panthers when his favorite player, Kevin Greene, signed with the NFL’s 29th franchise in the mid 1990s.

“I was like man, I think I’m going to pull for this team,” Maben said. “It went against all grains and odds and things of that nature, but I said, ‘I think this is what I want to do.’ ”

When Maben graduated from high school in Wisconsin and was deciding where to go to college in 2001, the Panthers played a part. Interested in theater arts, Maben applied and was accepted to three drama programs: Catawba College, Texas A&M and SUNY Purchase. While Catawba’s intimate, liberal arts program stood out to Maben, so did its proximity to his favorite team.

“(Catawba) really sold me, but it was also a cool thing to be 45 minutes away from Bank of America (stadium),” Maben said.

After graduating from Catawba, Maben stuck around Salisbury and got a job at the Salty Caper. In his spare time, Maben explored an interest he’d harbored since before he could even legally drink — brewing beer. Maben soon kicked his smoking habit in order to save up enough money to invest in home brew equipment.

“I gave up one vice for another, but the second vice was more productive,” Maben said. “For me, it made sense to really just go in head first and sacrifice something so that I could learn.”

Eventually, Maben’s brewing hobby became a side business for the Salty Caper. For two years, he experimentally brewed beers in a tiny space next to the Salty Caper’s main building. The exploratory beers were only sold in the Salty Caper’s two locations and at La Cava, a fine dining restaurant in downtown Salisbury.

“We invested a minimal amount of money and the whole reason was to see if it would work,” Maben said. “I had 17 beers in the back of my head that I was thinking maybe would work.”

The beer did work. The New Sarum brews were a hit at the restaurants. With the support of his business partners, Maben opened up a much larger brewery and taproom at 109 N. Lee St in 2016.

Since then, the brewery has continued to expand and its beers can now be found in grocery stores and bars throughout the region. New Sarum releases more than a dozen special concoctions each year, ranging from a pickle-flavored sour beer to dark, rich porters.

Several years ago, Maben even secured a meeting with Carolina Panthers executives to discuss about selling his beer in the team’s stadium.

“We went to the stadium and we walk down through the back of the stadium and I was like, ‘I’m not supposed to be here,’ ” Maben said. “It really became this cool, interesting and surreal feeling, like this is actually going to happen.”

This year, New Sarum developed a beer specifically for Maben’s beloved team. Called “Thirst and Goal,” the beer was sold to the few patrons allowed in the stadium.

Maben is the man behind the brewery’s ascension, but he attributes its success to his entire team, which includes his brother, Johnny.

“I have a great team of business partners that really understand how things should progress,” Maben said. “I’m going to reiterate that until the day I die. If I didn’t have a great team around me, I wouldn’t be sitting here.”

Along with continuing to survive during the COVID-19 pandemic, Maben said he wants to keep expanding New Sarum’s brand in 2021.