Spirit of Rowan: Drew Harwood’s work can be found across Rowan County 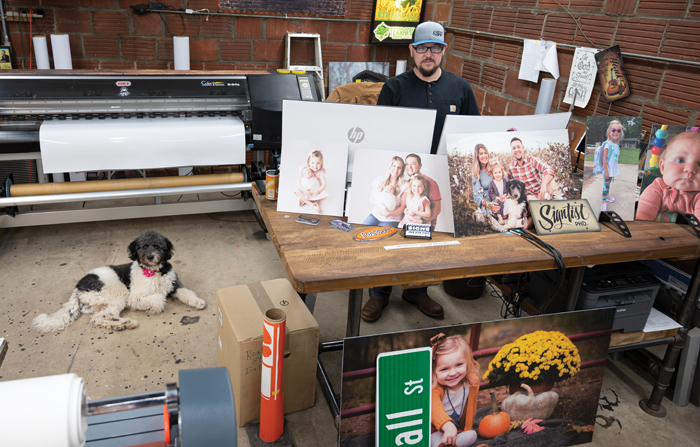 Josh Bergeron / Salisbury Post - Drew Harwood works in his Granite Quarry shop as his dog relaxes on the floor nearby.

Harwood Signs got its start in a downtown Salisbury basement on South Main Street in 1954, but Drew Harwood is taking the family business to new heights decades later.

Drew, 36, owns and operates the business on Depot Street in Granite Quarry. On a February day, customers were first greeted by a large cutout of Bernie Sanders in a pose that became a viral meme earlier this year — sitting in a chair with mittens and a brown coat on at the presidential inauguration. There’s also a cutout of Harwood’s uncle waving, with the printing so realistic that it might be mistaken for a real person. Besides the friendly faces of Drew and other workers at the business, there’s also his dog, Ivey, who’s eager to receive some attention.

Things are much different now than when the business opened in the basement of a theater on South Main Street. Then, Boyd Harwood was doing things entirely by hand. Today, the business uses high-tech printers to make everything from stickers and yard signs to car decals. At Harwood Signs, they’re particularly proud of a new large, flat-bed printer with ink cartridges as big as 2 liter bottles. Chances are, Drew says, he can make any idea a reality if it involves graphic design, advertising or marketing.

When the Granite Quarry Fire Department needed a sign to celebrate its status as the smallest department in the state with a No. 1 ISO rating, it turned to Harwood Signs. A toddler-sized No. 1 with the fire department’s logo now sits somewhere in Raleigh after state officials liked it so much they brought it to the capital city with them. The business proudly posted pictures of Rowan County’s state legislators posing with the sign and an image of the sign in the State Fire Marshal’s Office.

Their handiwork can also be found on the sign for Christo’s restaurant in Salisbury, the town of Landis’ boardroom, on the side of law enforcement vehicles and etched into glass in a memorial in Salisbury’s newest fire station for Justin Monroe and Victor Isler — two firefighters who died while battling a 2008 fire at Salisbury Millworks.

Drew talks fondly about the business and the ability to run a business where he grew up. The small town environment is A-OK with him and that’s where he’s stayed. In particular, he doesn’t envy the traffic in larger cities. He’s got kids now. So, he can’t wake up, shower, grab some clothes and head to work, but the commute is short enough.

“If I’m away for a few days, I’m ready to get back,” he said. “I’ve not really had any ambitious to travel anywhere far away.”

Besides growing up in eastern Rowan County, he was also always around the shop and has never truly known anything other than the family business. Drew has worked jobs here and there for others after hours. “But as far as punching a time clock or logging my hours, I’ve never really worked for anybody else,” he said.

Today, the business has grown so much that jobs usually need to be scheduled a month or more out. Drew brought on Justin Overcash, who previously worked at a competing company and took significant chunk of business with him.

“The clients he dealt with have followed him and he’s brought a whole other business here,” Drew said

He looks at the future and worries about customers who might choose an impersonal experience on the internet rather than the customer service-oriented experience he strives for.

It’s important for Drew to provide a one-on-one experience.

“It’s nice to be able to come in and put your hands on what you ordered,” he said. “If something goes wrong, you want a person you can talk to. … Satisfying the customers is the ultimate goal.”

Running a business means work doesn’t always stop at 5 p.m., but in his free time Harwood enjoys being with friends and family. He hunts and fishes occasionally and lives in the eastern Rowan area with wife Abby and two daughters. He attends St. James Lutheran Church in Rockwell.