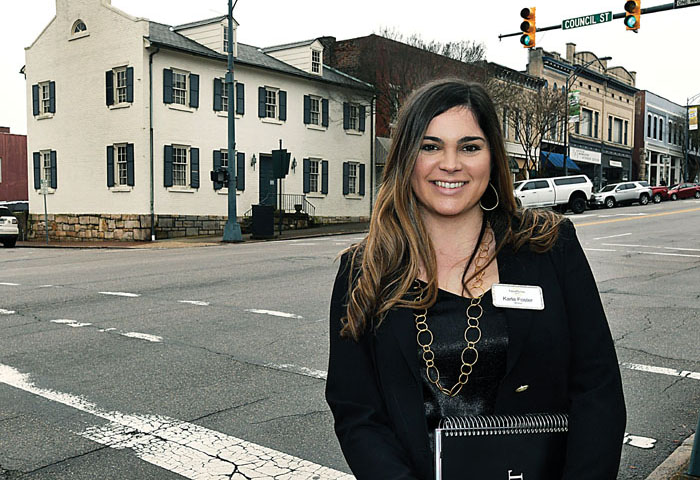 Karla Foster graduated from Appalachian State in 2009, but the most important education she received came after.

For as long as she can remember, Foster, 33, has been fascinated by crime. She’s always loved murder mystery shows. As a high school intern with the Salisbury Post, she found herself more interested in listening to the police scanner than writing stories.

When she graduated from North Rowan in 2005 and went to college, she already knew her course of study — criminal justice. After four years of learning about the legal system and going on police ride-alongs, Foster was ready to pursue a career path in law enforcement or government.

But Foster graduated during a recession. So, instead of working in criminal justice, she found herself at East Coast Wings.

“At one point, almost our entire staff at East Coast Wings had four-year degrees,” Foster said. “It was humbling, but you worked hard.”

Foster credits the two years she worked at East Coast Wings with teaching her the skills she uses now as one of Salisbury’s up-and-coming Realtors.

“I always say that prepared me most for what I do today,” Foster said. “It allowed me to be nimble and keep things on a schedule.”

Selling houses wasn’t in the cards when Foster graduated from college, but after several years of working at East Coast Wings, with Rowan County Youth Services and as a statewide organizer for a presidential campaign, Foster decided to earn her real estate license.

At first, Foster thought that a job in real estate would springboard her political career. Now, she’s not even sure being an elected official is in her future.

“I wanted to find something I would really enjoy, and now I’m not even sure I’d want to do politics,” Foster said. “I found something that I can’t even sleep at night most nights because I’m so excited to get back to work.”

For the first five years of her career as a real estate agent, Foster worked for Century 21. That experience, she said, was critical to her growth in the industry.

Wanting to forge a path of her own, Foster left Century 21 and formed New Pointe Realty in 2019. In the two years since Foster started her own agency, she worked to establish a reputation for herself as a Realtor who forms personal relationships with her clients.

“You can choose to be transactional or you can be relational,” Foster said. “Transactional might make you more money quickly, but relational will build a book of business that sustains you for your career. I wasn’t the person who opened the door, I was the person who held their hand and made it OK when it didn’t feel OK.”

Foster recently hired a second employee and has been taking advantage of the recent housing boom.

“I did well my first year and I had a killer year last year,” Foster said.

When she’s not selling real estate, Foster is engaging with the community by serving with a number of organizations, including the Rowan Chamber of Commerce, Rotary, East Spencer Housing Authority and the Rowan County Planning Board, among others.

“It equips me to be the most knowledgeable I can possibly be to help my clients,” Foster said. “I love it.”