Spirit of Rowan: Salisbury Police recruiter officer Shaneesha Smith proud to be ‘someone they can go to’ 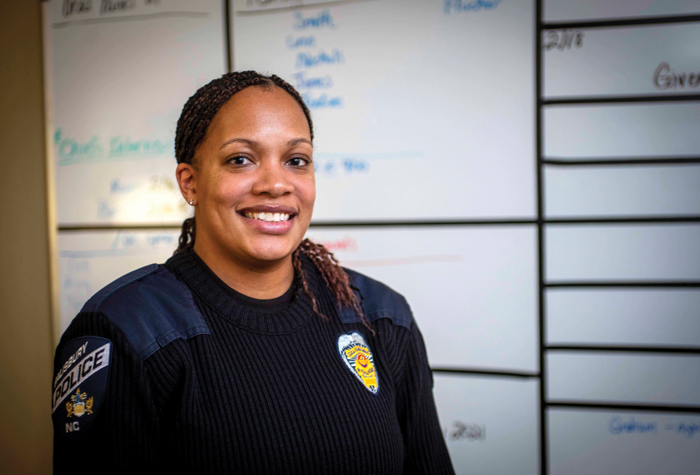 Proudly serving as the face of the Salisbury Police Department, officer Shaneesha Smith is likely the first interaction for those looking to get their foot in the door in a law enforcement career.

As the daughter of parents who served in the military, Smith, 34, grew up in Charlotte but also moved around often. Though she always had an interest in serving in law enforcement, she officially entered the field only two years ago.

She spent a year and a half working at the Cabarrus County Jail before moving to Salisbury in 2018. She was a patrol officer before switching gears to lead recruiting for the Salisbury Police Department in May.

As the recruitment manager, Smith often serves as the first face people see when considering a career with the Salisbury Police Department. As the main point of contact until hired, Smith arranges potential candidates’ written tests, polygraph interview, oral panel interview and the chief’s interview.

“You get to meet a lot of people and you get to see firsthand why they really want to apply here,” she said. “By the time I see them with the chief’s interview, I know pretty much all about them.”

Leading recruiting efforts for the department allows Smith to spend weekends with her three 13-year-old triplet daughters named Bianca, Brittany and Brianna. Smith also has a twin sister who lives with her and Smith’s daughters in Rockwell. Smith and her daughters enjoy spending time outdoors, hiking, swimming and paddle-boarding.

In September 2019, Smith was recognized for going above and beyond to help a stranded woman with no money or way to travel. Smith contacted a domestic violence shelter, but it was unable to admit the woman. So, she paid for a hotel room for the woman out-of-pocket. Smith said she saw the woman the following day walking to the bus station to travel to a shelter that was able to place her.

Many people are aware a career in law enforcement can be challenging, but it was particularly difficult as a Black woman working the field throughout the summer of 2020, which was defined by nationwide racial justice and police brutality protests following the death of George Floyd, a Black man from Minneapolis who died after an officer kept his knee on Floyd’s neck for nearly 10 minutes. A slew of protests in Salisbury quickly focused on the “Fame” Confederate monument and its perch downtown.

Gunshots were fired into the air near the monument on May 31 amidst local Black Lives Matter protests.

The following night, police officers used tear gas to disperse a crowd that became unruly after mistaking one of two men standing on the steps of St. John’s Lutheran Church for the man charged with firing gunshots the previous day.

Smith said that time was hard for her as both those protesting and those who support the “Back the Blue” movement expected her to take their side.

“For me, I was able to balance it because I had to do a job,” she said. “I had children who went to school and had questions. Right is right, and what’s wrong is wrong. I always guarantee that I didn’t take this position to go against the oath I took.”

In the previous two years, Salisbury Police Chief Jerry Stokes has credited the community with a record-low crime rate, with even fewer crimes reported throughout 2020. Smith said additional hires, more patrolling and community relations events that cultivate trust and discussion are factors to commend for the reduced crime.

“People got to know us and see that every interaction with us isn’t that you’re going to jail,” Smith said.

Smith credits the department with being representative of Salisbury’s diversity. She added that diversity and reduced crime both build trust in the community.

“I do it for the kids. I do it for all the other kids who look up to me or I became friends with,” Smith said. “I want them to know they always have someone they can go to. You can grow up and be who you want to be. You can choose your own life.”