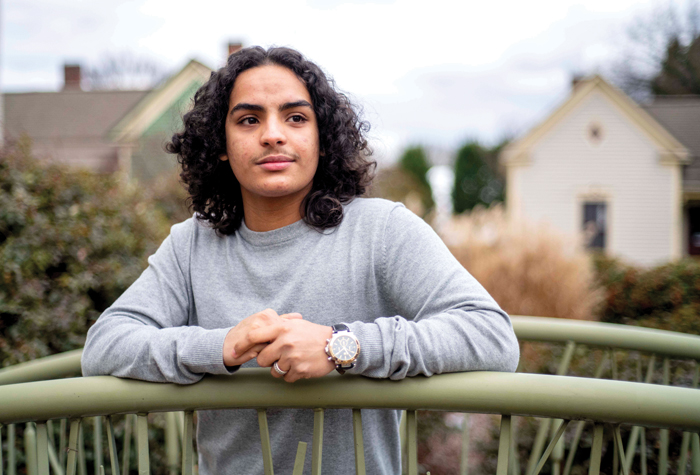 Salisbury High school junior Ali Khatib grew up in the Norvell Children’s Theatre in Salisbury performing in local theater at the age of 8. He is using those talents as in the area of cinematography helping create videos for public education. Salisbury NC 2/1/21 JON C LAKEY/FOR THE SALISBURY POST.

Ali Khatib has a long road ahead of him.

The soon-to-be-17-year-old Salisbury High School junior is in the stage a lot of active and creative teenagers find themselves in, exploring interests and figuring out what is next, between graphic design, filmmaking and music. He describes himself as the creative type.

He likes acting, too, and has been in more than a dozen productions, including work by Piedmont Players. In a normal year, he would be playing sports. He enjoys soccer, tennis, swimming and running cross country.

“I’m definitely at this stage in my life where I have my hands in a lot of pots,” Khatib said.

Khatib has another interest that is a bit unusual for a high schooler: education reform. Khatib was part of former Rowan-Salisbury Schools Superintendent Lynn Moody’s student advisory council and he sees the problems in American education.

“I definitely think that, currently, our mindset around education is one size fits all,” Khatib said, adding the accepted idea in education is one method will work for everyone when that does not match reality.

Khatib said each student has strengths and weaknesses, things they need to develop to reach a comprehensive sense of themselves. He also thinks contemporary education focuses on academics but often fails to reach students with useful areas of study such as financial literacy or understanding yourself emotionally.

Khatib said the system works for him. He has never struggled with academics, but he realizes his experience is not shared by all of his classmates and his academic success does not necessarily translate to a good life in the real world.

Khatib said he thinks it is beneficial to take an empathetic approach to education.

He has seen the power of prejudice impact his own life as well, belonging to racial and religious minorities. His mother is originally from Morocco and his father is from Egypt. They met after immigrating to the United States.

Khatib feels he has benefited from his background and has been instilled with a strong drive to succeed from his parents, who attended college in their native countries, moved to the U.S. with no support and succeeded. He has tried to adopt the drive he sees in his parents.

He has a rich cultural background through his parents as well. His favorite meals are the classic Moroccan dishes cooked up by his mom.

Khatib sees the cultures of his parents as things that have made him generous and hard-working.

Khatib was an all-virtual student last semester and returned to school in-person in January.

His grades were fine, but he did not feel engaged with virtual learning, found it laborious and sees virtual learning as a side effect of the pandemic that is impacting disadvantaged students.

For him, it was not satisfying intellectually or emotionally. He thinks it will help morale significantly when students are able to see everyone again and reconnect with friends they have not seen at school for the past year.

His main interest right now is cinematography and documentary filmmaking.

Spirit of Rowan: Drew Harwood’s work can be found…