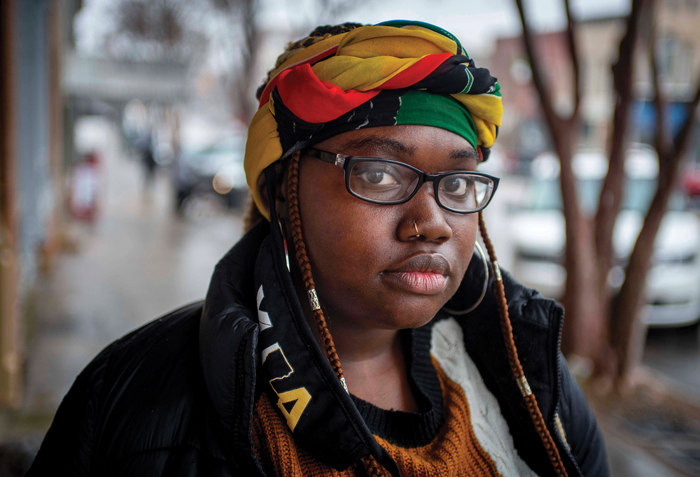 It was a surreal moment for Salisbury native Mahogany Koontz to walk for the first time in nearly a year in the empty space that once held the Confederate statue known as “Fame.”

Koontz, then 19, helped organize a May 2020 protest in downtown Salisbury following the death of George Floyd, a Minneapolis man who died while being restrained and held in police custody.

His arrest, which was captured on video by onlookers, showed a police office with his knee pressed against Floyd’s neck for nine minutes.

Floyd died handcuffed and lying face down in the street.

His death sparked widespread protests throughout the U.S., including in small cities and towns such as Salisbury.

Koontz, now 20, is a freshman political science major at Xavier University and recently reflected on the protest and her future in community and political activism.

In the months before the Salisbury protest and before Floyd’s death, Koontz began to see how other cities and states had already removed Confederate monuments and names from public buildings.

She thought to herself that change had to come to her hometown.

So Koontz joined other like-minded individuals, including members of Women For Community Justice, Rowan-Salisbury NAACP and local community activist and pastor Anthony Smith to organize early protests that included a mobile protest through downtown Salisbury.

Although Koontz did not organize the mobile protest, it made her realize more work needed to be done.

“Young people stood up and we did it. We really made a change,” she said.

Initially Koontz believed that she was “too young” to organize a protest. She thought, “Why would anyone listen to me?”

She rejected the attitudes and comments of some of the naysayers and decided if change was going to happen then she was going to be a part of creating the change.

When people were critical of her stance on community issues, Koontz said she received encouragement from her mother, Bianca.

Her mother was a buffer for many of those detractors and skeptics who tried to tell the teen what she was doing was futile.

In the wake of the protest she helped organize, others followed.

When the Confederate statue was removed, Koontz admitted she was surprised to see the very thing she stood with other local youth and community leaders to rally change for actually led to the removal of the monument.

“It really shocked me. I was like, ‘Whoa, I didn’t think that would happen, ever.’ But it did and it stirred up a lot in the community,” Koontz said.

Once the statue was removed, protesters, smaller in number, still lingered.

It was her work with the protests and voter education events that motivated Koontz to pursue political science as a course of study while in college.

Her mentor, Emily Perry, is a founding member of Rowan Concerned Citizens and she took the teen to voter registration events and other community events.

“I’d never thought little ol’ Mo would be doing this but because of Ms. Emily Perry this is why I’m like this now,” Koontz said.

“Those have been my mentors — the people who I go to for everything,” she said.

Smith and Love have grounded her and pushed her toward positive thinking, Koontz said.

“I feel like all the activism I did in the community and working with different people, I just felt like politics is the main thing I want to get into and so now that’s what I’m diving into,” she said.

Koontz said she’s begun working with campus United Nations programs and sees herself working as a political affairs officer with the global organization upon graduation.

Then Koontz plans to join the Peace Corps, travel the world and begin a career with the United Nations. She also hopes to obtain master’s and doctorate degrees in political science. She hopes to go on a tour of the United Nations and start diplomacy work, including travels to England.

Koontz had her first United Nations experience was while on a middle school trip. It intrigued her that there were so few women and made her want to change it.

“I was like, ‘We need some women in there to change some things around and I just feel like I’m going to be one of those women,’ ” she said.

Her last few months have been filled with school work, preparing for the annual campus event — Spring Fest — and she’ll soon begin to volunteer to do political phone banking.

When she’s not organizing community and political events or volunteering at her church, Koontz spends her time reading or watching her two favorite anime series — Naruto and Attack on Titan.

She also enjoys spending time with her family, her five cats and three dogs as well as her mentor Linda Hunter, who Koontz calls her second mom.

Hunter, a neighbor, befriended Koontz three years ago when the Koontz family moved into the neighborhood.

“Some people probably look at me as this small, chubby-cheeked kid, but I’m a very open person,” she said with a laugh.

Koontz, who is the oldest of nine children, last year was named a recipient of the Martin Luther King Jr. Humanitarian Service Award.

She’s volunteered her time with Rowan Helping Ministries, the Democratic Party and the American Red Cross, as well as served with Next Generation Productions.