Spirit of Rowan: Jenny Lee is working toward a stronger community 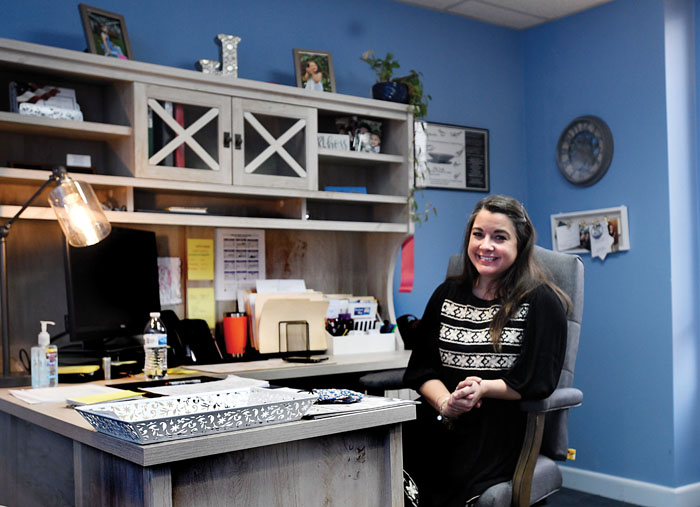 United Way Executive Director Jenny Lee at her desk in her office. photo by Wayne Hinshaw, for the Salisbury Post

After two years of nodding off during art history class, Jenny Lee decided that it was time to change her major.

Lee, 33, arrived at the University of North Carolina at Wilmington in 2007 knowing that she wanted to be as close as possible to the coast, but without any idea of what she wanted to study.

“My first two years were like a lost cause,” Lee said.

One day, a friend who Lee worked with at a local restaurant suggested that she consider joining the school’s social work program. Lee took her advice and enrolled in an introductory social work class taught by Professor Deb Bowen.

“One day (Bowen) brought in a Food Lion plastic grocery bag and she said, ‘This bag right here is, for some people, all that they have,’ ” Lee said. “She did this activity with us where we only had a plastic bag to put our possessions in. What would those possessions be? Would they be identification cards, a Bible, some snacks? That was very eye opening for me.”

It was the moment when Lee knew that she’d found the right major.

“That class changed my path,” Lee said. “I got redirected and kept going down this path of social work and community efforts.”

Lee went on to earn her bachelor’s degree in social work and worked for a home rehabilitation nonprofit while getting her master’s degree from East Carolina University. After working as a grant writer for ECU for about a year, Lee returned to her hometown of Salisbury.

“As my children started to get older to where they were school-age, I wanted them to grow up here where I grew up,” Lee said. “My family is here, most of my closest friends are here, so it’s something I wanted to do.”

In the summer of 2018, Lee was chosen to take the mantle as executive director of Rowan County United Way. Lee has worked to implement a new community partner impact program that allows the United Way to funnel resources to local organizations that work to fulfill specific community needs such as substance abuse or mental health.

“It was a new way of funding initiatives and providing grants,” Lee said. “We’ve had some beautiful outcomes.”

Two initiatives that have benefited from the new model, Lee said, are One Love mental health services and Main Street Marketplace, which is growing hydroponic lettuce to improve people’s access to healthy food.

More recently, Lee spearheaded efforts to raise about $1.54 million during the COVID-19 pandemic through an emergency relief fund and the United Way’s annual fundraising campaign.

“Even in this moment of despair where 2020 looked nothing like what I thought it would in January, it was inspiring to see how our Rowan County neighbors came out to help each other,” Lee said.

As the pandemic goes on, Lee said the United Way will continue to help the community in any way possible.

After that, her long-term goal is to work to address as many issues in Rowan County as possible.

“As a social worker, if I had it my way, I would work myself out of a job,” Lee said. “I want people to stop needing services because they’re self sufficient.”