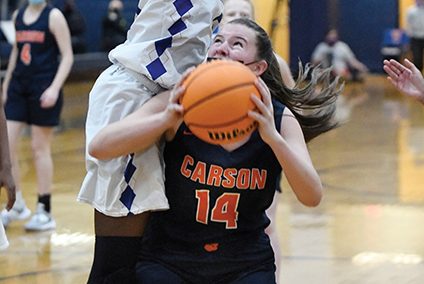 CHINA GROVE —  Carson’s 5-foot-9 senior forward Carleigh Perry, MVP of the 3A state championship game, was, to put it mildly, a different player in the postseason.

She’s the Post’s Co-Player of the Year for her work in the two conference tournament games and Carson’s five state playoff games. The postseason was the only time Carson was seriously tested, and Perry was outstanding in six of those seven contests.

Perry averaged 12.7 points and 10.6 rebounds in the postseason.

She only averaged 9.0 points per game overall, but she was well-rounded. She led the Cougars in rebounding (8.3 per game) and was second in assists and steals.

“I don’t think there’s ever been a better story than Carleigh,” Carson head coach Brooke Stouder said. “She came to high school with such high hopes after a great middle school career at Erwin, and then she tears an ACL before her freshman season and suffers a second ACL tear in the middle of her sophomore season. But she comes back healthy as a junior and then she finishes her career on an undefeated team and as MVP of a state championship game.”

It’s a story some Hollywood screenwriter might want to look into.

At the end of the 12-game regular season, Carleigh had posted a few double-digit rebounding games but her scoring stats were so modest that Stouder was worried that she wouldn’t make All-North Piedmont Conference. Two of Stouder’s senior guards, Colbie Perry, who had the team’s top scoring average, and Ellie Wilhelm, who had great percentages, were voted NPC co-players of the year. At that point in time, they certainly should have been.

It wasn’t that Carleigh chilled out during the regular season — she never really chills — but Carson was romping by such massive margins that the Cougars didn’t need her to score, and she was sitting down early in  running-clock games. When Carson blasted North Iredell 62-29 in its second outing, she scored one point. She had four in the 56-14 mauling of Davie. She had five when Carson devastated South Iredell 7o-29.

Those 1s and 4s and 5s don’t do a whole lot for the scoring average.

The first really serious clash for Carson was the third meeting with West Rowan in the championship game of the NPC tournament.

West took it to Carson in the second quarter, and the Cougars’ lead was only 28-24 at halftime. Challenge accepted. Perry finished with 14 points and 14 rebounds, and the Cougars pulled away 69-45.

When the 3A brackets were released by the NCHSAA, the first thing first cousins Carleigh and Colbie Perry noticed was that Enka, the team that eliminated Carson in 2020, was a potential third-round opponent.

“That Enka loss stuck with Colbie and me for a year,” Carleigh said. “We talked about it. We knew if we got another chance to play them we had to make it count.”

In the second round against Cuthbertson, Carson 6-footer Mary Spry went down with a serious ankle sprain barely 30 seconds into the contest. That was also the one postseason game in which Carleigh didn’t have a great night,  but Colbie and Hannah Isley and a lot of defense got the Cougars through it.

Two days later, Saturday, Feb. 27, the Cougars were making the long trip past Asheville to play Enka. Carleigh, who is 5-foot-9, had a legendary night in a 64-56 victory. She had 19 rebounds to go with her 11 points, and 5-foot-9 girls aren’t supposed to get 19 rebounds.

“After Mary went down, Carleigh rebounded for both of them,” Stouder said. “She has a passion for rebounding, and she was definitely at her best in the playoffs.”

Carleigh was very good in the regional final against Hickory — 15 and 8 against a towering front line. That’s the game in which Carson shot the lights out early and built a cushion it never gave back.

Asheboro, the quickest and most athletic team Carson faced all season, was next. That was the 3A state championship game held at Providence Grove High in rural Randolph County.

“The Asheboro game was very different than Hickory,” Carleigh said. “We didn’t start out shooting well and it didn’t seem like we were playing well. But we weren’t going crazy. We stayed very calm and we kept working on defense. We knew that eventually we’d make some shots.”

Carleigh made a lot of them in an MVP effort. She scored a career-best 19 in a 51-40 state-title game and added eight rebounds.

The state-championship game was the culmination of a long ride together for the Perry cousins, who entered the world two months apart in 2002.

“Me in October, and then Colbie in December,” Carleigh said. “We were on different teams our first year playing ball at Hall Gym, but after that, we usually got on the same team. We played in a lot of AAU games and a lot of middle school games (the Erwin teams with the Perrys and Lani Isley were undefeated) before we got to Carson. It’s been a journey.”

Colbie, an exceptional long-range shooter, signed with Converse a while back. Carleigh has gotten increased recruiting attention in recent weeks and likely will be playing college ball next season. She can adjust to being a wing player in D-II or D-III. Her skill set is strong. She can rebound in traffic and go end-to-end. She has the grit to defend 6-footers. She can pass and shoot with range. She stepped out and made 3s that surprised Enka, Hickory and Asheboro.

“She never took anything for granted and never took a play off,” Stouder said. “Every single play, you knew she was going to run the court hard. She’s a girl that just works and works.”