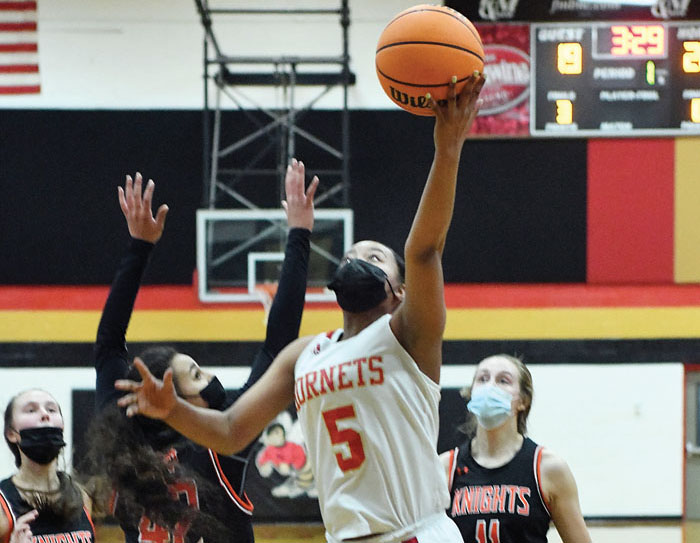 SALISBURY — Usually, the apple doesn’t fall from the tree.

Search the Catawba women’s basketball record book, and the name Lakai Brice comes up 33 times. Sixth in career assists and ninth in career scoring, but the steals are the really impressive thing. She’s the program record-holder for steals in a game (9), season (112) and career (324).

Brice became a coach, everything from rec ball to high school.

She has coached the Salisbury High Hornets to 134 wins over the last eight seasons, getting the program back on track after some lean years.

For the past two seasons, Brice has had her daughter, Kyla Bryant, in the backcourt. It’s no coincidence that the Hornets have been one of the best teams in 2A those two seasons. They were a Final Four team in 2019-20. They lost a two-point game to eventual state champ Shelby this season. It was smooth sailing for Shelby once it got past the Hornets in Round 2.

Bryant turned in a solid stat sheet as a sophomore — a county-leading 15.4 points per game, while averaging 6.0 assists, 4.8 steals and 3.4 rebounds.

But the stats don’t tell all of it. In a 16-game season, the Hornets had blowout wins in more than half of their outings. On an average night, they won by 27. They had some good players on the bench, so Bryant rarely played heavy minutes and never padded her stats.

“There were a lot of nights where Kyla played 22 of the 32,” Brice said. “Even in the North Davidson games, she sat down some.”

Both of Bryant’s parents were Catawba basketball players.  Her father, Quentin Bryant, came to Catawba from North Stanly, where he had starred in football and basketball.

“Quentin was calm and laid-back, and I was the one who had a lot of fire,” Brice said. “Kyla has some of both of us. She’s so quiet and nice by nature, but she’s competitive on the court. She’s an only child. That gives her an independent spirit.”

Brice was putting a ball in her daughter’s hands before she could walk, but she didn’t seem overly interested for a number of years.

“I took a class at City Park and got really interested in karate,” Bryant said. “And I was excited about being a cheerleader.”

Not surprisingly, she showed an aptitude for basketball, once she gave it a shot. Brice was coaching youth teams at Hall Gym, teams that had players such as future South Rowan star Avery Locklear and future West Rowan phenom Khaila Hall, and Bryant was finally bitten by the hoops bug.

By the time she was 9, Bryant was playing “up” in the Junior Hornets league for girls ages 11-13.

“She played for Theresa Knox’s team, and that’s when I started to see that she might be something special,” Brice said.

Bryant experienced success and made the game a priority in her life.

“I was playing with older girls, but I could see that basketball was something I could be good at,” Bryant said. “When you find out what you’re good at, you want to get better, so I started really working to improve.”

Bryant was impressive enough on the AAU circuit that she had a UNC Wilmington offer before she got to high school.

As a freshman for the Hornets, Bryant averaged a team-high 13.0 points and scored 27 in the regional final against Newton-Conover. She was first team all-county and was runner-up for CCC Player of the Year.

“That was a big confidence-booster for me,” Bryant said. “My confidence level changed from my freshman year to my sohomore year.”

The makeup of Salisbury’s team also changed some. The team’s primary ballhandler and leader Anayia Fulson graduated, so Bryant became a playmaker first and a scorer second in the COVID-shortened 2020-21 season.

“There were games when some of our other girls were struggling, and Kyla was able to take over when she needed to,” Brice said. “But she had the ball in her hands more this year, so she was always looking to get everyone on the team involved.”

She was ready for that.

“I  prepared myself for being more of a passer and ball-handler with Anayia gone,” Bryant said. “It’s all about understanding the personnel you have, and our personnel was different.”

Playing for her mother has its benefits as well as its pressures. The mother-daughter coaching thing is never an easy dynamic, although Bryant and Brice always seem to handle that side of things smoothly.

“My mom knows me and knows what I can do and what I need to be doing better than anyone,” Bryant said. “If I don’t do something right, I know we’re going to be talking about it when we get home, but that’s OK. We’re a basketball family. We both love the game.”

Bryant’s sophomore season (14-2) included a 24-point effort against 4A Northwest Guilford in a one-point loss. She scored 23 against North Davidson in the game that lifted the Hornets to another CCC regular-season title.

Bryant is only 5-foot-8 and she’s neither super-fast nor super-bouncy, but she has exceptional basketball instincts. She sees the next move before anyone else does, and she always makes the right pass in the halfcourt or in transition. She’s got a special connection with Salisbury’s outstanding shooter Rachel McCullough. She gets the ball to McCullough where she needs it and when she needs it.

“I do think Kyla’s biggest strength is being a student of the game,” Brice said. “She studies film like a coach.”

Bryant is a bright student with a 4.1 GPA, which is one of the assets that make her highly recruitable.

She also has a championship work ethic.

“It’s not like I ever have to ask her to go to the gym,” Brice said. “Kyla is asking me. And she works extremely hard at basketball. Basketball is her craft. She wants to perfect it.”

Bryant shot 73.3 percent from the foul line this season, but only got to the stripe 30 times. So that’s something to work on, attacking more and drawing more fouls. And doing a better job of selling foul calls to the referees.

Bryant shot 34.1 percent from 3, which is respectable, but her stroke is very smooth and she knows she can do better from long range. She was deadly on 2-point attempts, shooting well above 50 percent.

She’ll work on her craft during the coming AAU season and will be ready to lead the Hornets on a state-title quest as a junior.

Shelby will still be out there waiting, but the Hornets expect to have Haley Dalton, Jamecia Huntley and Makayla Noble at 100 percent next season. All three are game-changers.

Brice watched Shelby’s 15-point win against Farmville Central in the 2A state championship game and thought about what might have been for the Hornets.

“We out-rebounded Shelby by a lot, had more steals and had more assists,” Brice said. “But we still didn’t win. Hopefully, we’ll get another chance.”

The daughter would like that just as much as the mom.