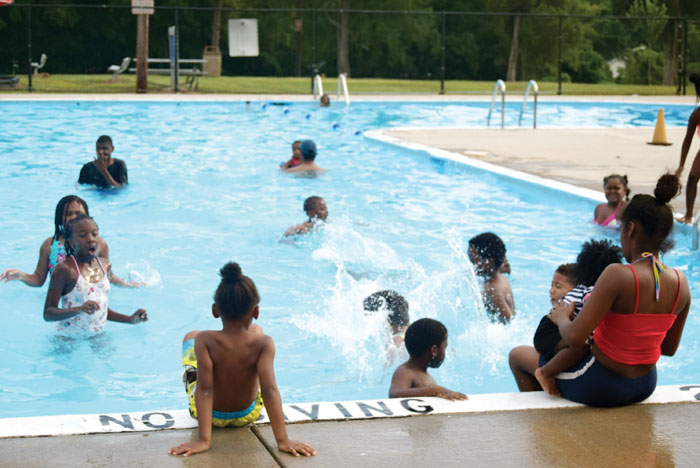 Families came out on Aug. 1, 2017, for a free swim at the Fred Evans pool as part of National Night Out. Those who attended said the celebration helped ease tensions from a violent weekend. Rebecca Rider/Salisbury Post

SALISBURY — The Fred M. Evans pool served thousands of children during the summer months of the pandemic, and members of the family for which the facility is named are reiterating a call to make some needed improvements.

The pool, located at 110 Old Concord Road, was built in 1966. The late Fred Evans was certified to become the first lifeguard at the pool. And after he died in 2015 at the age of 74, the pool was renamed for him the following year.

Janine Evans, the daughter of Fred Evans, spoke during a March 16 city council meeting, praising the success of the pool withstanding the challenges brought forth by the pandemic last summer. She then asked members to provide funding for improvements and upgrades beyond the periodic touch-ups.

“It’s actually time now for an all-out makeover of the pool,” she told the Post. “The city should put as much energy into re-establishing that pool as one of the forefronts of recreational activity for Salisbury.”

Though the pool liner is repainted every few years, the entire pool needs to be replastered. Janine said she would also like to see the ventilation system in the shower redesigned as well as an air-conditioned space for lifeguards to rest and hydrate. Currently, lifeguards only have a stand. Additionally, she and her mother, Raemi Evans, want to see the pool become Olympic size, including lanes for swimming laps.

She added that the city could generate more revenue if lights were installed for night swims.

Parks and Recreation Department Director Nick Aceves told the Post the pool plastering would cost about $98,000. He does not currently have estimates for the lifeguard room, bathroom update and eventual pump hose renovation.

The department requested $65,000 for the plastering of the pool in the 2019-20 fiscal year budget. It was not granted the funds. The pandemic made obtaining that funding even more challenging.

The pool still includes many of the old pipes it was constructed with today. Janine said, “It looks almost identical to the way it looked in the ’70s,” with a few exceptions.

Based on some conversations with Mayor Karen Alexander and Mayor Pro Tem Al Heggins, Janine said she feels the council is “very alert to the needs of the pool.”

“The pool has a very strong history, not only in the Black community of Salisbury, but Salisbury as a whole,” Janine said. “It’s something we need to continue to treasure and build on.”

“It still stood the test of time,” Aceves said. “The pool provided a place for kids and families to have a slight bit of normalcy,”

The pool opened in June 2020 rather than its usual open on Memorial Day. Prices remained the same — with children charged $1 and adults charged $2 — and lifeguard were still able to monitor swimmers.

Janine told the Post the Evans family was able to raise $1,500 for local children to swim for free on weekends.

COVID-19 protocols and capacity limits led to the implementation of two-hour block systems to allow more locals to enjoy the pool. The pool can normally hold 75 patrons at one time, but staff only allowed 25 at one time. Staff cleaned the pool in between blocks.

Additionally, masks were required at the pool but not while patrons were in the pool. Some tables were closed to the public as well.

“Nick and his staff continually tweaked the schedule,” Janine said. “They made sure that everything was done exactly how the CDC advised. They made sure the kids were safe. We made it through the entire summer without having to close.”

Raemi said the Evans family was unable to provide swimming lessons last summer, but it plans to offer them this summer if COVID-19 precautions will allow.

Throughout the summer, the Evans family continued to stock the library area, which was dedicated to Raemi in Fred’s memory, with books and school supplies. She told the Post “books go rapidly in the summer.” So, it’s stocked at least two times each week.

She added that, though the pool was the center of recreation for Black children in the community, she’s happy to see that it has become a mixed group of children.

“I’m sure my husband would be very satisfied to know that,” she said.