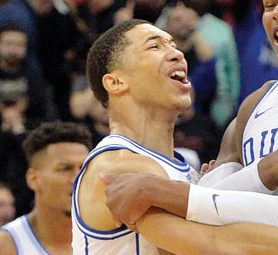 In a statement Saturday, the guard said he would enter his name into the transfer portal to take advantage of the extra year of eligibility granted to players due to the COVID-19 pandemic. Goldwire called his time with the Blue Devils “one of the best experiences of my life.”

Goldwire made his mark primarily through defense while earning a bigger role in his last two seasons. That included making the Atlantic Coast Conference’s all-defensive team as a senior, ranking second in the league with 2.3 steals and seventh in assists (4.0).

That came after he averaged just 7.5 minutes per game through his first two seasons.

“Jordan always embraced his role, and his improvement over the course of his career is a testament to his mentality and competitive spirit,” coach Mike Krzyzewski said in a statement.

Earlier this week, freshman forward Jaemyn Brakefield announced his plans to transfer from the Blue Devils.