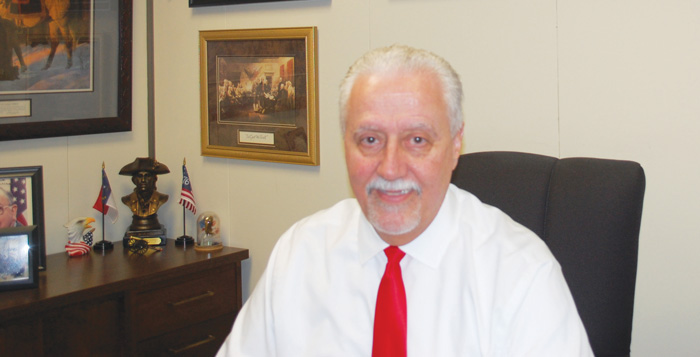 SALISBURY — Sen. Carl Ford, a Republican representing Rowan and Stanly counties, is sponsoring a bill that would allow the concealed carry of a handgun at churches that have an affiliated school on campus.

Senate Bill 43, titled Protect Religious Meeting Places, passed the Senate on March 1 by a vote of 31-18, with only three Democrats for the measure. Ford said opposition to the bill stemmed from Democrats’ concern for children’s safety.

The bill amends a state law that prohibits weapons on the premises of educational institutions by allowing those with a valid permit to carry a handgun concealed if the property is both a school and religious gathering place, including religious schools. The bill also clarifies the concealed carry could only occur outside of the school’s regular operating hours, which includes when extracurricular activities are taking place. Additionally, it wouldn’t apply to any properties owned by a local board of education or county commission, which excludes properties owned by Rowan-Salisbury Schools.

Allowing conceal carry at churches with affiliated schools is also included in House Bill 134, which passed the House 72-44 on March 11. Only five Democrats voted in support, and Rep. William Brisson, R-22, voted against the bill. Both Reps. Harry Warren and Wayne Sasser are sponsoring the House measure.

Ford said S.B 43 was born from concern among churches of all denominations that current laws prohibit church goers from having a concealed handgun on Sunday. Additionally, Ford said the nation has seen more and more churches attacked in recent years. At least 19 fatal shootings have occurred at churches since the Columbine school shooting in 1999.

Ford said the decision to allow concealed carry on the premises would ultimately be up to the church, adding that some may only designate a few to carry. Others may allow anyone who’s qualified to carry. Current state law allows both open and concealed carry of handguns at churches, with churches making the ultimate decision for whether they’re allowed.

In S.B. 43, it’s stated that the church goer cannot conceal carry a weapon on the church’s property if those in legal possession or control of the premises have posted a “conspicuous notice” prohibiting concealed carry.

A similar bill, House Bill 652, passed both chambers during the 2019-20 legislative session, but it was ultimately vetoed by Gov. Roy Cooper due to concern of threatening the safety of students and teachers.

H.B. 652 passed 77-38 in the House, with 12 Democrats in support of the measure, and 28-15 in the House, with four Democrats casting a favorable vote. Reps. Julia Howard, Warren and Sasser, who all represent Rowan County, voted in support of the measure then. Rep. Larry Pittman, who represented Rowan County at the time, also voted for it. Ford supported the bill when it was up for a vote on the Senate floor.

The House failed to override Cooper’s veto in July by a vote of 66-48 — just two shy of the 60% required to override.

S.B. 43 was referred to the House Judiciary 1 Committee on March 2 and has not moved since.

Another bill supported by Ford that has passed the Senate is S.B. 101, which requires compliance with immigration detainers and administrative warrants for undocumented immigrants convicted of certain crimes.

The bill calls for a jail administrator to confirm the legal status of those detained for any period of time if the person is charged with a felony drug charge, homicide, rape, other sex offense, kidnapping, abduction, human trafficking, gang-related activity or violation of a protective order. If the administrator or staff members are unable to determine the detainee’s legal status, the bill calls on them to request it from U.S. Immigration and Customs Enforcement, which will know whether the detainee has an outstanding warrant for such crimes in another country. If so, the bill calls for deportation.

The bill also requires jail administrators to report annually to the state’s Legislative Oversight Committee on Justice and Public Safety beginning October 2022 with information about queries made to ICE and actions taken afterward.

If approved, the bill would become effective Dec. 1 and apply to offenses committed afterward.

Ford said the bill only applies to those detained with outstanding warrants in another country.

“We’re going after criminals,” he said. “I mean, if you’re a citizen with an outstanding warrant, you’re going to jail.”