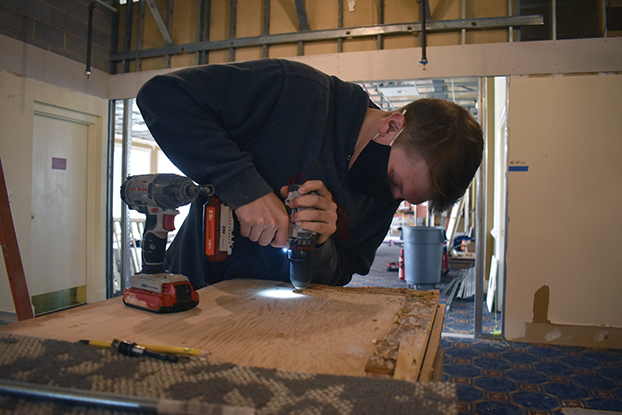 Jake Pryor drills into the bar in the clubhouse, which is just one area of the building that is undergoing upgrades. Ben Stansell/Salisbury Post

SALISBURY — Victor Wallace has taken plenty of golf swings at the Country Club of Salisbury, but none had been aimed at a wall until February.

A little over a month ago, Wallace joined fellow club leaders Diane Fisher, Mark Robertson and Missie Alcorn to smash holes in a wall of the clubhouse. The others elected to use sledgehammers, but Wallace decided to drive through the wall with a used club. The ceremonial demolition officially kicked off the renovations that will transform the clubhouse’s look and feel.

Although the makeover project started just a few weeks ago, the process was set in motion about three years ago when the club’s leadership noticed a troubling trend.

“People were leaving,” Fisher said. “People didn’t enjoy coming out anymore. So, we had to stop our membership loss and we had to grow our new members. That’s what made us take a hard look at it.” 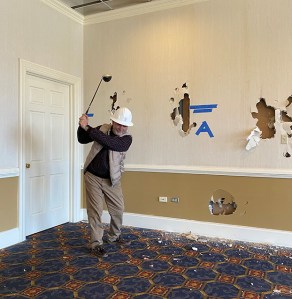 Victor Wallace practiced his golf swing by smashing into a sheetrock wall in the Country Club of Salisbury’s clubhouse. Photo submitted.

Under the direction of Fisher, Alcorn and Wallace, the club’s strategic planning committee conducted a survey to determine what the club’s members would like to see improved. 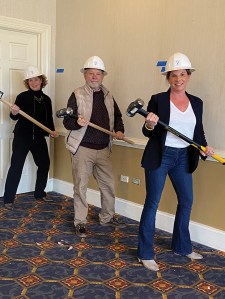 Diane Fisher, Victor Wallace and Missie Alcorn pose during the ceremonial wall breaking for the renovations currently being done at the Country Club of Salisbury’s clubhouse. Photo submitted.

Clubhouse renovations, which were delayed over a year by the COVID-19 pandemic, include connecting the upstairs dining area with the bar area to make for a more spacious and casual eating experience. Like many clubs, the Country Club of Salisbury aims to offer its members everyday dining options devoid of white table clothes or the need for formal attire.

The smaller downstairs grill and dining area will also get a facelift, but the biggest changes will come in the clubhouse kitchen.

“Really the bulk of this initial part of the clubhouse renovation had to be done in the kitchen,” Fisher said. “We’ve almost doubled the size and have almost all new equipment. It’s going to be wonderful in there.”

The improvements to the clubhouse are part of a larger, multi-phase $2.8 million Centennial Campaign to “renew, refresh and repurpose” the country club’s facilities. The unveiling of the campaign in 2020 coincided with the club’s 100-year anniversary.

“We’re trying to do three main things in the first part of this: make downstairs casual, renovating upstairs throughout the kitchen and then the next two steps would be renovating the pool and then the veranda and then there are a whole bunch of needs,” said Robertson, president of the country club.

The clubhouse renovations will cost roughly $850,000 and be finished by June if things continue on schedule, but there is no timeline for when the remainder of the projects will be started or finished. Fundraising will be an ongoing effort, and renovations will be done when the budget allows. 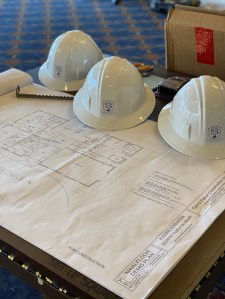 Renovations to the inside of the clubhouse are only the beginning of the upgrades coming to the Country Club of Salisbury. Photo submitted.

Instead of billing all of the club’s members a flat fee to fund the ambitious campaign, the club’s leadership decided to take a different approach and seek out donations personally.

“Essentially, we wanted the people to give who had the means and desire to give,” Robertson said. “If they saw the need, they saw what we were going to do was going to help the club and make it better for themselves.”

About a third of the club’s members have already donated to the campaign, Robertson said.

“Once we sit down with people and explain what we’re doing and show them why we’re doing it, it’s not that hard of a sell,” Robertson said.

Even before the campaign was announced, leadership already started to change the direction of the club. Robertson said that 40% of the club’s roughly 450 members have joined in the last two years. The club’s leadership wants to continue to expand and improve the club to keep pace with the area nearby.

“Salisbury is going to grow, and we’re positioned to grow with them,” Robertson said.

Growth in membership will help preserve a club that has been a site for civic meetings, big events and fundraisers in Salisbury since it was founded in 1920.

“The club is a very family oriented organization. It’s involved decades and generations of members,” said Wallace, himself a third generation member. “There’s a lot of people who are a part of that legacy.”

Once renovations are complete on the clubhouse, the next projects will be to improve the swimming pool facilities and to install a veranda behind the clubhouse that will allow for outdoor dining. The golf course and tennis courts are also due for some improvements in the future.

More information about the Centennial Campaign can be found by contacting Clubhouse Manager Frank O’Hara at 704-637-3200 or online at ccofsalisbury.com.