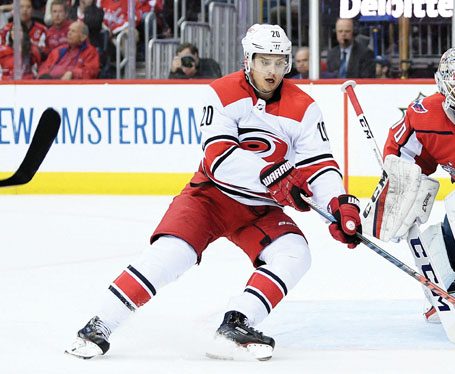 Sebastian Aho scored twice Wednesday night as the Hurricanes took a 2-0 lead in their series with the Predators. (AP File Photo/Nick Wass)

COLUMBUS, Ohio — Sebastian Aho scored 1:26 into overtime to give the Carolina Hurricanes a 4-3 win over the Columbus Blue Jackets on Thursday night and earn a split of a four-game series.

Aho had a wide-open net  after Martin Necas’ shot off a rush was stopped by Joonas Korpisalo, but the goalie’s momentum forced him out of the crease as he tried to contain the rebound.

Oliver Bjorkstrand tipped in a goal from the doorstep to tie the game for Columbus with 16 seconds left in regulation.

Cedric Paquette, Nino Niederreiter and Necas also scored for the Hurricanes, and Alex Nedeljkovic followed up a shutout on Monday night with 33 saves.

“It was a very tough game overall for us,” Niederreiter said. “We didn’t play the way we wanted to play, but we found a way to win.”

The Hurricanes are 2-1-2 in their last five, following an eight-game win streak, and are in second place behind Tampa Bay in the Central Division.

Carolina dropped the first two to Columbus, one in overtime and one in a shootout, before winning both this week.

“They were definitely grind games, every single one of them,” Niederreiter said. “We expect to win every one of them, but these last two were big ones.”

Zach Werenski and Cam Atkinson also scored for the Blue Jackets, and Joonas Korpisalo made 29 saves.

After a scoreless first, a Blue Jackets’ second-period push finally paid off when Werenski fielded a rebounded puck off the back boards and bounced it in off Nedeljkovic’s back at 7:03. The lead lasted only 46 seconds, until Paquette spun around in traffic and scored from the slot.

Necas gave Carolina a 2-1 lead late in the second when he poked a wrap-around shot in off Korpisalo’s skate.

Columbus tied the game again early in the third when Atkinson’s shot from the far left was inadvertently redirected by Carolina defenseman Dougie Hamilton. Niederreiter scored at 15:42 to put the Hurricanes up again, and Warren Foegele just missed an empty-netter with under a minute left before Bjorkstrand’s goal sent to the game to overtime.

“We find a way to get one (point),” Werenski said, “There’s no time to sit here and feel sorry for ourselves that we didn’t get a second. I thought we played a good hockey game. There’s a lot of things we can take from that game and build on.”

With an assist on Niederreriter’s goal, Hamilton has registered a point in the Hurricanes’ last 13 games, tying the longest point streak in the NHL this season. The Hurricanes next play host to Tampa Bay on Saturday.