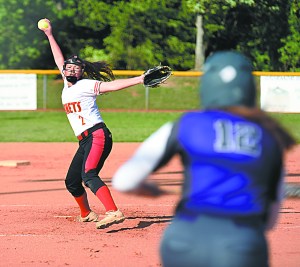 Rain wiped out most of Thursday’s schedule.

In jayvee football, DJ Adams and Jordan Graham-Taylor led Salisbury to a 28-20 win against Central Davidson at soggy Ludwig Stadium.

Carson’s jayvees will play Mountain Island Charter at home on Monday at 6 p.m.

No girls soccer scores were reported on Thursday.

It’s unlikely any boys tennis was played on Thursday.

Salisbury (3-0) and South Rowan (2-1) are off to good starts in what appears to be a highly competitive Central Carolina Conference race.

East Rowan has gotten off to a 2-0 start, including a 9-0 North Piedmont Conference win against West Rowan.

Several softball games got started on Thursday, but couldn’t be completed because of heavy rain.

Salisbury and South Davidson played two innings in Denton before play was stopped. The Hornets led 5-2 in the non-conference game.

Ellen Yang and Caroline Cozart were both 2-for-2 and Cozart had two RBIs. Yang was in the circle and had struck out four.

Oak Grove scored five runs in the first inning against visiting South Rowan, and the Grizzlies held a 6-0 lead in the bottom of the fourth when play was stopped.

In the biggest softball game of the night, Carson held a three-run lead over East Rowan in the fourth inning when play was stopped.

After an umpire injury as well as a rain delay, action was suspended.

Kary Hales and Makayla Johnson had hits for Carson, while Myah Sifford had a hit for the Mustangs.

The teams plan to complete the suspended game on April 13 at East prior to the regularly scheduled North Piedmont Conference game.

East Rowan opened the season with a 2-0 win at West Rowan.

There will be a Rowan County Championship boys golf tournament. It has been scheduled for Crescent on April 14.