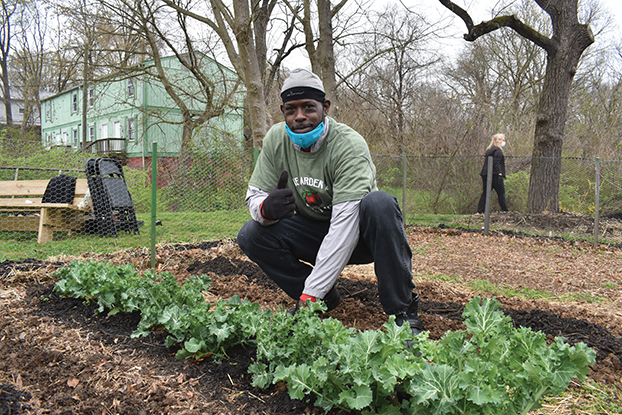 Wayne Turlington squats near a row of kale in the Garden of Eatin, which celebrated its spring grand opening on Wednesday morning. Ben Stansell/Salisbury Post

SALISBURY — Art Wiles couldn’t help but smile as he looked over rows of kale, cabbage and collards at the Garden of Eatin’ on Wednesday morning.

“It’s a joy,” Wiles said. “I love to see things coming together.”

Wiles was one of several volunteers who gathered at the corner of North Liberty and Long Street to celebrate the spring grand opening of the small garden, which is managed by Rowan Helping Ministries.

Coffee and donuts were enjoyed. T-shirts were given away at the small ceremony. But the main reason for the gathering was to jump-start the spring gardening season. Steve Combs, who led efforts to create the garden, welcomed volunteers back with a short speech.

“It’s a great day to be a plant,” Combs proclaimed.

Volunteers then worked to plant strawberries and onions, cleaned the garden of any litter and watered the rows of freshly planted crops. 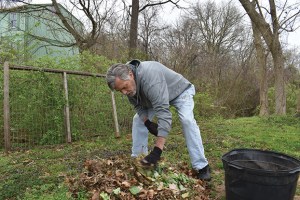 Art Wiles sifts through garden and kitchen scraps that will be used to make compost. Ben Stansell/Salisbury Post

The Garden of Eatin’ was brought to life in August of 2019 when a small group led by Combs put the first plants in the ground. Before then, the former pastor had been transporting Rowan Helping Ministries guests to and from the garden at his church. When he retired, Combs decided it was time to bring the garden to them.

“(Combs) said that he would love to engage in the garden because it built such community and asked if we had a space,” Grubb said. “This land was donated to us a year before that and we’d talked about having a community garden but we didn’t have a leader.”

Grubb said the garden has “blossomed — no pun intended.”

The garden has since produced nearly 175 pounds of produce distributed through Rowan Helping Ministries’ food pantry and served on plates to guests at Jeannie’s Kitchen.

Wayne Turlington, who works at the shelter and helps out in the garden, said he can tell when produce he’s helped grow is plucked from the Garden of Eatin’ and incorporated into meals at the shelter’s kitchen.

“You already know by the taste,” Turlington said. “You’ve got food in the supermarkets that’s processed and all that, but once these are done, you pull them up and you can eat them because they’re so fresh.”

Although Turlington had never gardened before volunteering at the Garden of Eatin’, he now has a green thumb.

“Doing this right here is fun,” Turlington said. “Everybody gets together and we plant something for the community, for the shelter.”

Turlington was a guest at Rowan Helping Ministries when he moved to Salisbury from New Jersey about a decade ago. Not long after, he landed a construction job helping build the organization’s new Robertson-Stanback Center and was hired on as a maintenance worker after its completion.

Turlington and Wiles have been helping out at the garden since the beginning. Monique King, who is staying in the shelter after recently moving to Salisbury, is a new volunteer.

Unlike Turlington, King comes to the garden with a background in horticulture after working in landscaping and in a greenhouse near Burlington for several years. King said her main goal is to help others through the garden.

“It’s really important to me now to not be a burden to the community, it’s about changing my life and doing things to help make the community better,” King said. 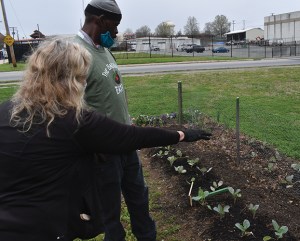 Under the watchful eye and hard work of dedicated volunteers, including master gardener Julie Apone, Garden of Eatin’ has expanded and improved since it was founded. A short wire fence was recently installed around the garden’s perimeter to keep out animal intruders, like the groundhog that decimated the garden last fall by feasting on its crops.

While groundhogs aren’t welcome in the garden, guests at Rowan Helping Ministries and members of the community are encouraged to help out whenever they can. The volunteer group typically meets at the garden twice a week during the spring, summer and fall.