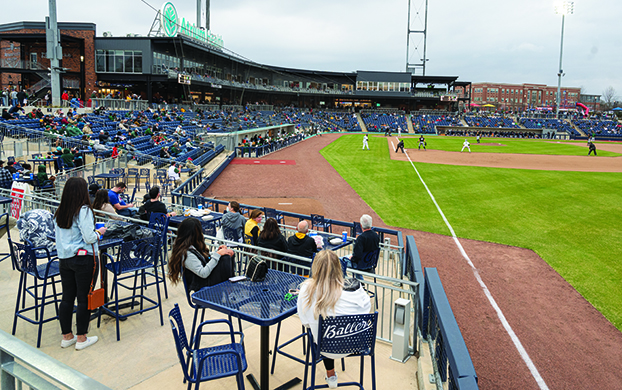 A game Tuesday between the University of North Carolina at Charlotte and Appalachian State University provided a sneak peak of what a redeveloped downtown Kannapolis will look like when at full capacity.

Even with a limited capacity of around 1,600 fans, there was a new energy flowing in what was previously a drab, largely empty downtown. In 2003, when Pillowtex laid off thousands, who could have imagined that cheers of excited baseball fans would echo across an area where massive textile buildings stood? For the men and women who work for the city of Kannapolis and have poured long hours into downtown revitalization, it should feel like their dream is starting to come true.

Lines for concessions on Tuesday were so long that they ran into one another. Kids played in a grassy area next to the stadium during the baseball game. To catch a glimpse of the game, two men stood on an RV in a grassy parking area. People gathered in nearby businesses, too, as the game took place.

“You can just tell the energy pulling into the ballpark and getting into town today,” App State Coach Kermit Smith told Post reporter Ben Stansell.

It was a good, successful test run of the new stadium. As Cannon Ballers General Manager Matt Millward said, “It’s been awesome to actually see baseball played on the field.”

Particularly for the first several games, watching the Cannon Ballers or any team play will be like a new, unfamiliar restaurant moving into town — an exciting novelty. Folks will be more excited about the experience rather than the score of the game.

The challenge for the city of Kannapolis, commercial developers and the Cannon Ballers will be ensuring the experience is enjoyable enough to keep fans coming back for more. Success in this case doesn’t mean sold-out stadiums the whole season. If businesses can turn a profit, storefronts fill up and tax revenue repays debt the city incurred to redevelop its downtown, that’s a dream come true.

Crowd size, however, will still be important. Small crowds mean small financial returns. The good news is Gov. Roy Cooper’s newest executive order increases capacity at stadiums such as Atrium Health Ballpark on Friday. It’ll mean more fans and another test run next week when Davidson and Wofford colleges tangle on Tuesday. With COVID-19 cases waning and vaccines coming at an increased pace, it’s possible crowd size limitations will be lifted completely when the Cannon Ballers start play in May. Because of the coronavirus, the Cannon Ballers also will need to make sure the public is hearing its messaging about health and safety protocols.

There’s plenty to think about for the future, but it’s safe to call the first game at Atrium Health Ballpark a success.