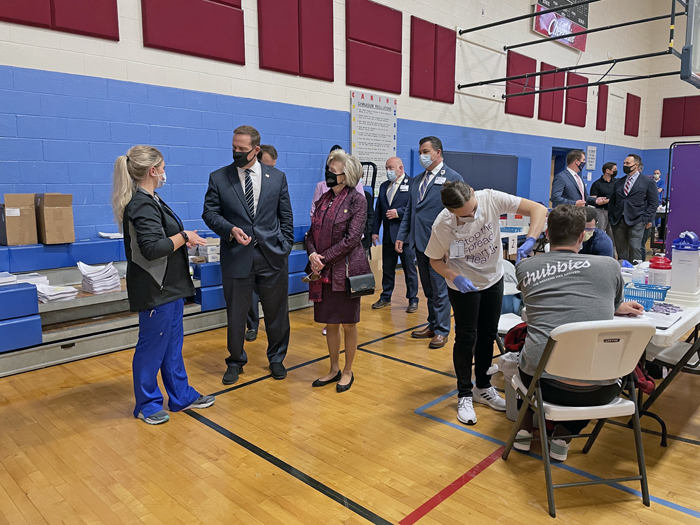 Led by Tiffani Burney, Novant Health has operated the appointment-based clinic in the gym of the YMCA, located at 828 Jake Alexander Blvd. West, since January.

Budd asked about how city and health leaders made the decision to use an appointment-based model. Alexander said the initial vaccination site at the West End Plaza “was a mess,” with waits spanning several hours. Local health officials first distributed vaccinations at the West End Plaza using a “first-come, first served” model before shifting two weeks later to an appointments-only model.

“Novant became a leader in our community,” Alexander said. 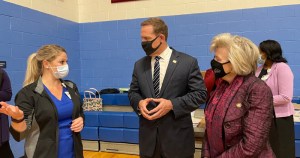 Budd told local officials two of his amendments offered in the latest stimulus package, the American Rescue Plan, to “cut red tape” and speed up vaccinations were not ultimately included. One amendment, the Vaccinate More Americans Act, would have prevented leftover COVID-19 vaccines from being wasted by allowing vaccine providers to administer shots to the next allocation group automatically. The second mandated that health departments that receive the vaccine must distribute them in an equitable way without forcibly cancelling appointments.

Included in the American Rescue Plan, which was signed into law by President Joe Biden on March 11, is $50 billion for additional COVID-19 testing and contact tracing, $19 billion to increase the size of the public health workforce and $16 billion to fund vaccine distribution and supply chains. The package also provides $46 billion to expand federal, state and local testing, enhance contract-tracing capabilities with new investments to expand laboratory capacity and set up mobile testing units. It also contains about $14 billion to speed up the distribution and administration of COVID-19 vaccines across the country.

Blabon said Novant staff are able to vaccinate an average of 2,500 to 3,000 locals at the YMCA site each week. He praised Novant for not wasting any doses and explained that staff refer to a waiting list of patients in the event of excess doses.

Budd commended former President Donald Trump and his administration for “Operation Warp Speed,” which allowed the vaccine to be quickly developed and sped through the FDA approval process “by skipping bureaucratic red tape.”

“The fact that we’re only a year into this and we already have a vaccine well under way, I think that’s a testament to the strength of American innovation,” Budd told the Post.

He added that touring Salisbury’s facility and talking with leaders shows that the rollout continues to get better.

Budd said he has not yet received his vaccine but is “certainly in line for it,” adding that he’d rather see older citizens and those at high-risk receive it first since he’s “young and healthy” and has antibodies from testing positive in November.

The CDC advises individuals who previously had COVID-19 to be vaccinated because experts do not know how long protection against the virus lasts after recovery.

“Even if you have already recovered from COVID-19, it is possible — although rare — that you could be infected with the virus that causes COVID-19 again,” the CDC website states.

For his constituents who are hesitant, Budd encouraged them to first talk with their doctor about receiving the vaccine.

“First of all, do your research. We don’t want people to have to be forced to do this,” Budd said. “We want them to take it because it’s a good idea. We want to make sure they understand their own health situation.”

Budd voted against the American Rescue Plan when it was presented for a U.S. House vote on Feb. 27 and has instead advocated for reopenings across the nation — what he calls “the best stimulus.”

Part of his response, Budd said, is continuing to assist constituents having trouble receiving the vaccine as well as directing them to economic resources such as Paycheck Protection Program loans.

“This is a big confidence builder,” Budd said. “This part of the COVID-19 response is probably the biggest part to getting our economy reopened.”

Blabon said the best thing Budd can do for the county at this time is ensure it receives more doses of vaccine.

“For Congressman Budd to come out to tour, to ask us questions about what he can do to help us and help Novant Health, means so much,” Blabon said. “The more doses we get, the more people we can vaccinate. And the more hope that we have that we can eradicate this terrible virus.”