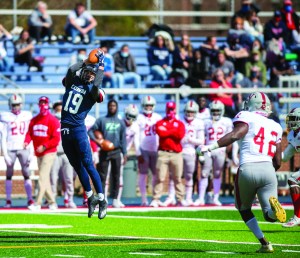 Will Sheehan makes a catch for the Indians against Newberry.  Photo JON C LAKEY/FOR THE SALISBURY POST.

SALISBURY — Catawba’s football team lost 28-21 to Newberry in last Saturday’s spring season opener, but the Indians looked good in the second half.

They’ll try to build on the momentum they gathered while wiping out a three-touchdown deficit. Down 21-0 at the break, they put themselves in position to win.

Quarterback Ken Avent was the standout for the Indians with three rushing touchdowns, including jaunts of 43 and 50 yards.

Wingate also has played only one game. The Bulldogs ended a string of 475 days without playing a football game when they traveled to Wilson on March 13 and battered Barton’s young program 55-17.

Wingate rolled up 480 yards of offense. QB Shaw Crocker sat down early after throwing for 175 yards and two TDs.

Wingate averaged 33.6 points per game last season and has been first or second in the South Atlantic Conference the last four seasons.

Catawba had a big defensive effort against Wingate in 2019 and lost 13-10.

The most frequently asked questions this week has involved who can go to the game.

Wingate has updated its attendance policy in recent days (see below), but it sounds like it still may be challenging for the average Catawba fan to get a seat. Wingate does not anticipate having tickets to sell at the gate on Saturday.

In accordance with an updated executive order that will begin Friday, March 26 at 5 p.m., Wingate University will be increasing the maximum capacity at home football games. Wingate will allow 1,750 fans to the two regular season home games, starting this Saturday at 6 p.m. for the Catawba contest. Fans are still required to wear face coverings at all times in Irwin Belk Stadium, while also practicing safe social distancing.

The new executive order allows 50 percent capacity at outdoor venues. Irwin Belk Stadium holds 3,500 people. Approximately 200 tickets will be for sale to the general public on Friday, March 26 at 11 a.m. It is recommended that tickets be purchased online ahead of time and either saved to the purchaser’s cell phone or printed out. Tickets will likely not be available on game day.

With this increase, more tickets have been made available for students as well as Wingate faculty and staff. Two hundred fifty tickets have been reserved for the Catawba football team and will be reserved under the discretion of the Catawba Athletic Director and head football coach. All fans on the list will have the opportunity to purchase a ticket for $15 upon arrival on the visiting side of the stadium.

Parking lots open at 4:30 p.m. on Saturday, parking will be free. Gates open at 5 p.m. There will still be no tailgating allowed this season. Concessions will be open during Saturday’s game. Kickoff is set for 6 p.m.