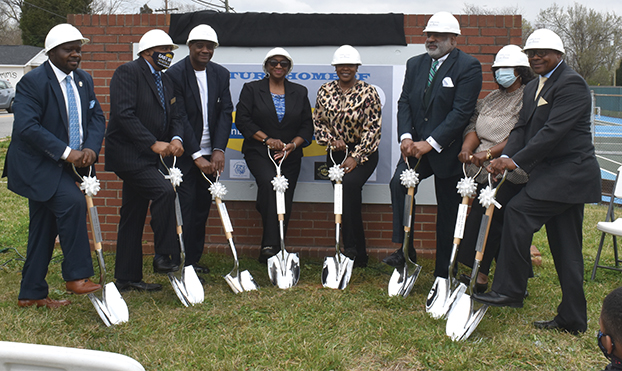 EAST SPENCER — With optimism in the air, the team behind a new development in East Spencer sunk silver shovels into the grass near the former site of Dunbar High School and Dunbar Enrichment Center on Wednesday afternoon.

The groundbreaking ceremony for the development, which is being called Dunbar Village at East Spencer, featured spirited speeches from politicians, developers and educators.

The project is a co-development effort between Dunbar Development Company and Charlotte-based Diva Construction Company. The companies plan on converting the partially burned and currently vacant campus of the historic school into a multi-use development that will be a community hub for “education, entrepreneurship and economic development.”

In addition to an educational component, the development hopes to bring affordable housing and fiber internet infrastructure to East Spencer.

“As we were putting this together, we wanted to make sure this project included the smallest, youngest person in the town of East Spencer,” said Dunbar Development Company CEO Darrell Foxx. “We don’t want to leave anybody behind and we want to make sure there is a resource for every problem, solution to every problem and that we have the resources that we need here, where you sit or stand in the epicenter of East Spencer.”

As the sign for the new development was unveiled to much applause, East Spencer Alderman Tony Hillian proclaimed: “This is surely a great day in the great town of East Spencer.” 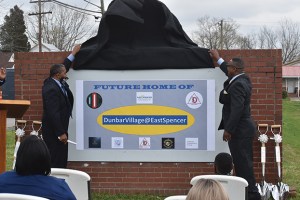 East Spencer Mayor Barbara Mallett also spoke during the ceremony and voiced her support for the development.

“We think this is a good start to restore opportunities for this area,” Shelton said.

“My job is to keep blazing a path and find the pieces to the puzzle,” Muhammad El said. “I’m relieved, so I’ll get to rest for a few minutes, but in another few minutes I’ll be right back to trying to figure out how we make our word bond in terms of what we say today.”

To fund the ambitious project, Muhammad El said developers will seek private donations and apply for government grants that may be available. Antoine Smith, the co-chair and president of Diva Construction Company, said developers have raised enough capital to start work in the near future. The site is located in an opportunity zone, which could help developers attract investment in the project.

Even though the North Carolina Charter Schools Advisory Board recently revoked its charter, Essie Mae Kiser Foxx school is still projected to be an anchor tenant at the property.

Essie Mae Board Chair Tina Foxx Wallace said having the charter revoked is only a minor setback and that the school is “exploring options” to move forward as an educational organization. One of those options, she said, is transitioning to a private model.

Wallace said the school still has every intention of being a cornerstone of Dunbar Village at East Spencer.

“As early as yesterday, we had an opportunity to speak with some parents and they are excited about the move and the opportunities that are going to be coming available for their students,” Wallace said. “They’re excited, which makes us even more excited and optimistic about our plans.” 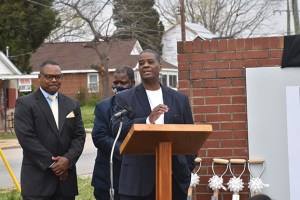 At the end of the energetic groundbreaking ceremony, Smith said it was “time to go to work.”

Although shovels were plunged into the ground on Wednesday, real construction work won’t begin for several more weeks. And while the bones and guts of the facility are in good shape, Smith said there have been some structural challenges developers didn’t anticipate.

Smith said a community cleanup will be held on Saturday, April 3, for residents of East Spencer to help developers clear out the building on the campus that sustained significant damage during a fire at the property in 2014. The building, called “building one” by developers,” will be the first to receive a makeover, Smith said.

Once the space is cleaned up, Smith said developers will have a better idea of what needs to be done to transform the building into a “flex space” that will serve as a community center.

Smith also said developers will be sending out a survey to residents of East Spencer to gauge what the community wants the development to be.

“Tell us what your needs are, small or great, and we will make sure that we facilitate this property to deliver to you what you need,” Smith said. “You can improve the economic value of the community, you can improve the lifestyles of citizens and residents in that community.”