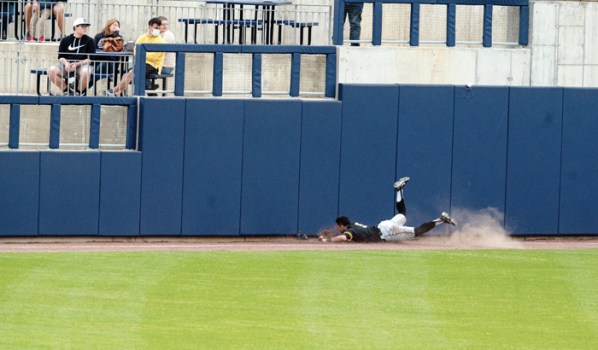 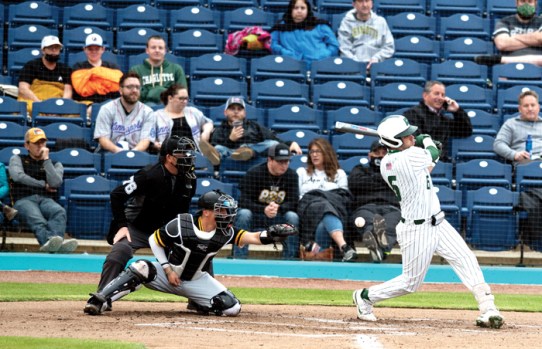 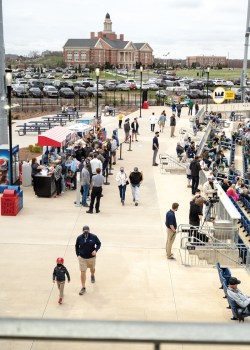 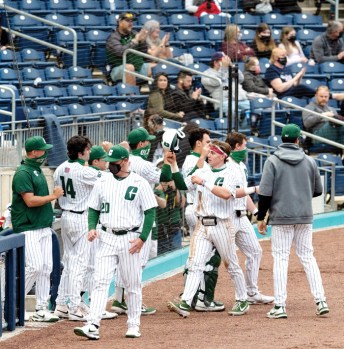 Apparently even Mother Nature was tired of waiting for baseball to be played in downtown Kannapolis. Only a few sprinkles ended up falling on the field as Charlotte took on Appalachian State in the first competitive game ever at the $52 million stadium — the crown jewel of the city’s downtown revitalization efforts.

The outcome of the lopsided game, which took over four hours to finish, felt secondary to the mere fact that it was played.

“Number one, it was an honor to play the first game here,” Appalachian State Coach Kermit Smith said. “It’s a beautiful ballpark. You can just tell the energy pulling into the ballpark and getting into the town today.”

The game itself was sold out and 1,648 fans — some clad in yellow and black with others sporting white and green — watched the game from socially distanced seating throughout the ballpark.

The first game in the stadium was supposed to be played 341 days ago on April 16, but the COVID-19 pandemic delayed and eventually caused the cancellation of the minor league baseball season. Instead of being a place where fans gathered to watch baseball, Atrium Health Ballpark became a city park with bleachers, where locals went to exercise or grab a hotdog.

“My staff has been there through thick and thin,” Millward said. “I am so proud of them for getting through this but also for connecting with the community, whether it’s been through community events, opening our ballpark up to the public through our food and beverage operation, or even through social media, different videos and pictures and just the interactions with the community.”

The baseball game was a long time in the making, but the matchup between Charlotte and Appalachian State came together only recently.

“We only picked up this game about two and a half weeks ago, so to put all of this together in 17 days has been a fun ride,” Millward said.

Millward said the game served as a “dry run” for the ballpark’s staff, preparing them for the upcoming 60-game Cannon Ballers season that will stretch from May to September.

It was a game full of firsts, including the inaugural ceremonial pitch thrown in the stadium by Kannapolis Mayor Darrell Hinnant and the first competitive pitch came a few minutes later — a few miles faster by Charlotte’s Hale Sims, who struck out six batters in four innings of work and earned the win.

The first run in the ballpark came off the bat of Charlotte’s Hunter Baker, who drove in Gino Groover and Craig Keuchel in the bottom of the second inning with a triple popped down the left field line. The 49ers were also responsible for the first home run, which came in the sixth inning when Will Butcher crushed a ball over the left field wall.

The game brought fans of both teams to the ballpark, including Bradley Pole, Alyssa Kennedy and Jenna Boothe, all students at Charlotte. To make sure they had a spot in the stadium, which was only at 30% capacity, the three friends had multiple computers and phones out and ready to purchase tickets when they went on sale for Charlotte fans at noon on March 12.

The trio of Charlotte students made the roughly 35-minute drive to support their school, but also to experience the first game at the Cannon Ballers state-of-the-art ballpark.

“Just being able to come out and see our team play in a facility like this that’s $50 million plus is pretty cool so that’s why we decided to get tickets,” Pole said.

Pole added that Charlotte is allowing fewer than 200 fans into its home ballpark due to COVID-19 restrictions, so coming to a game in Kannapolis served as a chance to see the school’s players compete.

Charlotte Deputy Athletic Director Darin Spease said he was glad to see the team’s fans turnout in droves for the contest.

“Our institution churns out a lot of alums, has almost 30,000 students and it was an opportunity for them to get off-campus and come to a place like this where they can stretch out and see live sports,” Spease said. “We’ve all missed that.”

Being there for the first game was an opportunity that Tim and Karen Deal said they couldn’t pass up. The Salisbury couple visit the ballpark almost every week to walk around the concourse. Tuesday night was the first time they’d been to the stadium when baseball was being played.

“It’s great,” Tim said. “We’ve been waiting for this for a long time.”

Tim also graduated from Appalachian State in 1991, so coming to the game allowed him to cheer on his alma mater in person, an opportunity he said he doesn’t get very often.

The couple plans on coming back to the ballpark in the near future, both to walk and to watch the home team play.

“We’ve been looking forward to the Cannon Ballers getting to play so we’re hoping to come to some games,” Tim said.

Tim and Karen will have to wait until May 4 to see the Cannon Ballers kick off the season against the Down East Wood Ducks, a Low-A-East league foe and an affiliate of the MLB’s Texas Rangers.

Millward is counting down the days.

“We are building so much momentum into the season,” Millward said. “That’s only going to continue to build.”

As always, Millward said “the best is yet to come.”

Fans will have another chance to watch baseball in the ballpark before the Cannon Ballers’ debut in May. Davidson will host Wofford at the ballpark on March 30 at 6 p.m. in what’s being billed as a “tangle of cats and dogs.”