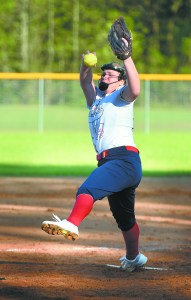 Strange homered in the first inning of the North Piedmont Conference game. Misenheimer connected in the third.

Strange did the work in the circle, striking out 10, walking five and allowing only one hit.

Strange was one pitch from a no-hitter. Allison Ennis tripled with two outs in the seventh, but Strange got a groundout to end the game.

Taylor Walton was outstanding in the circle for West, striking out 15 and walking two. The homers were the only hits she allowed.

CONCORD — South Rowan won 6-0 against Robinson on Tuesday in a non-conference softball game.

Avery Crowell pitched into the seventh inning for the Raiders,

Zoie Miller had a triple and two RBIs to lead South’s offense.

Addison Hendrix and Kaylyn Nuckols did the pitching for Davie in the five-inning romp.

Sydney Dirks homered and went 3-for-3 with five RBIs.

London Dirks went 3-for-4 with a homer and six RBIs.