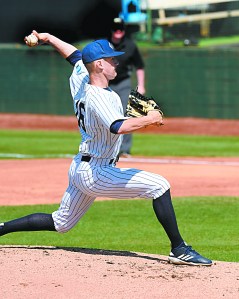 Catawba (13-4) was short-handed, but Ketchie made up for it. He struck out six while shutting out North Georgia for eight innings.

Jake Rowden’s solo homer, his first, was the highlight for Catawba’s offense. Hunter Shepherd had a run-scoring double, and Henderson Lentz (North Rowan) had the other RBI.

Shepherd and Zack Miller had two hits each.

Robbie Cowie allowed a homer in the ninth but nailed down the save.

Catawba plays a SAC doubleheader at Queens on  Saturday.

• The Bears came back to take the nightcap 6-4 on Lora Beth Wood’s two-run homer in the seventh.

Bailey Benton homered for the Indians.

Catawba is home against Barton on Thursday.

Catawba sophomore Alice Sylven shot 74-71 and was runner-up for the individual title. She made three birdies on Tuesday.