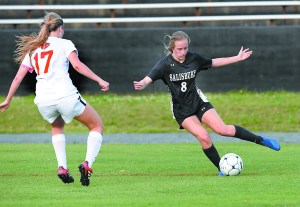 Salisbury opened the girls soccer season with a 2-1 win against CATA on Monday at Ludwig Stadium.

CATA leveled the match in the first 10 minutes of the second half and the score remained tied for almost 20 minutes.

With just over  17 minutes remaining, senior Lillie Rusher converted a free kick from nearly 30 yards out to give the Hornets the lead and ultimately the match.

“Both teams competed and had opportunities throughout the match,: Salisbury coach Matt Parrish said. “Coach Jay Niessner is a guy I have a lot of respect for and I know that every time we play them we are in for a battle. Muire had the unenviable task of facing Appalachian recruit Shannon Studer and did a fantastic job in a back-and-forth affair.”

“From inconsistent practice schedules to coming off of spring break for our first match, I will absolutely take it,” Parrish said.  “We did well.”

The doubles team of Donaldson/Goodnight took an 8-5 victory.