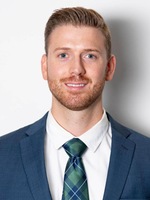 Former Catawba basketball player Lee Martin is experiencing March Madness first-hand in his first season as a Division I coach.

Martin is an assistant for the Ohio University Bobcats, the No. 13 seed that upset No. 4 Virginia in the first round of the NCAA Tournament.

Ohio plays Creighton in Indianapolis in a second-round game on Monday at 6 p.m.

The 6-foot-6 Martin played high school ball at North Surry High in Mount Airy. He scored 1,244 points for the Greyhounds and has been inducted into the school’s Hall of Fame.

Martin played a post-graduate season at Hargrave Military Academy and was recruited by Catawba. His coach at Hargrave was Kevin Keatts, now the N.C. State head coach.

Martin played a role off the bench as a Catawba freshman for head coach Jim Baker on a strong team that went 20-11 and played in the Southeast Regional. Catawba had players such as Antonio Houston, Donald Rutherford, Dominick Reid, Rob Fields, Stephen Coles and Donzell Williams that season.

Martin became a starter as a sophomore and averaged 8 points and 4 rebounds. He posted similar numbers as a junior.

His best season for the Indians came as a senior in 2012-13. He started every game and shot 40 percent from 3 and 80 percent at the foul line. He averaged 12.8 points and 7.2 rebounds, led the Indians in steals and was second in blocks. He had 21 points and eight rebounds in his final game for the Indians.

Martin entered the coaching ranks as an assistant at Hargrave Miitary Academy. He served as the associate head coach on the 2016 national championship team and the 2017 Final Four team.