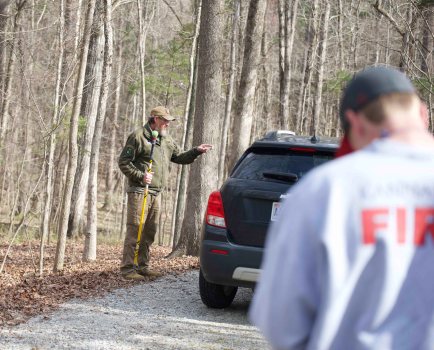 Carl Blankenship/Salisbury Post - Charlie Williams demonstrating gathering information from a vehicle without copromising the scene while a firefighter sketches his movements. 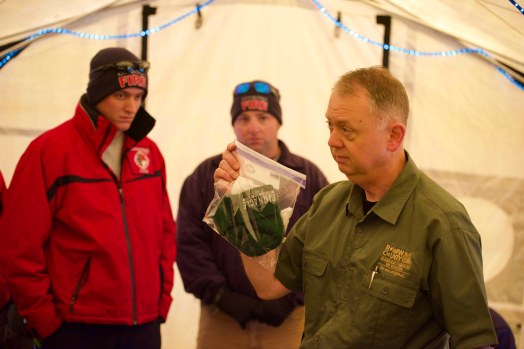 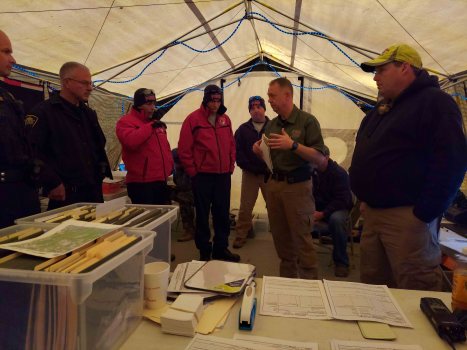 SALISBURY — Someone went missing in the woods on purpose last week, playing a profound game of hide-and-seek with local rescue personnel as they tackled a staged training scenario to put their methods into practice.

Emergency personnel weaved a scenario that included a man with medical issues, a recent history of mood problems expressed via social media posts, a vehicle left at a campground that looked lived-in and a few recent photographs. According to the scenario, the man went for a hike and emergency personnel believed he got lost and experienced some kind of medical event.

The goal was to find him and get him out of the woods alive.

James Stokes, a Kannapolis firefighter, was that man.

Stokes volunteered to get lost in the woods on Thursday and camp out there through Sunday for the exercise. Stokes is trained to do this and he was staying in touch with emergency personnel throughout the exercise. As of Saturday morning he had been located once by a bloodhound brought in by the state.

Rowan County Emergency Services Battalion Chief Bradley Dean said this is a chance to review previous material and work on new skills at the same time. It was the first exercise of this kind the county has hosted. It plans to make it an annual affair.

“All the agencies throughout the area have been really supportive,” Dean said.

There were about 20 entities involved in the exercise, and it was sponsored by Rowan County Special Operations Task Force as well as Rowan Rescue. The task force is made up of eight local fire departments and Rowan County Emergency Services.

Rescuers were split into teams and sent into the woods. There was a boat and a ladder truck deployed as well as a helicopter from the N.C. State Highway Patrol.

When Stokes was found, the group was debriefed, Stokes broke camp and the team who found him left along another route so the exercise could continue.

In the real world, a missing person is a “law enforcement event” that requires collaboration with rescuers. For a rescue like the training scenario, a county starts by calling in local resources, expands its requested assistance to mutual aid partners in surrounding areas and, eventually, the state.

During the training, personnel staked out the woods using search methods learned previously and gathered clues. A major trove of clues for Stokes’ whereabouts was the vehicle left at the campgrounds at Dan Nicholas Park.

Charlie Williams, of Pineland Resources Inc., is an Army veteran whose organization teaches rescue and law enforcement personnel how to track people. Williams said his organization works with rescuers and law enforcement all over the state.  For this exercise, Pineland was teaching, observing and preparing feedback on how the rescuers can improve.

Williams on Saturday demonstrated a technique for gathering clues from a vehicle without harming the integrity of the scene. He approached the vehicle in straight, clear lines that could easily be sketched by an observer, started his observations on the outside and used mirrors to see the inside of the vehicle before opening doors and seeing what he could observe standing outside.

Conserving the scene is important for law enforcement purposes. It can be critical for maintaining a subject’s scent so a dog can be used to track someone.

As part of the exercise, the car was a trove of articles of clothing and other clues.

Williams said there are several exercises like this held throughout the state, but most of the state-sponsored ones have been canceled since the COVID-19 pandemic began.