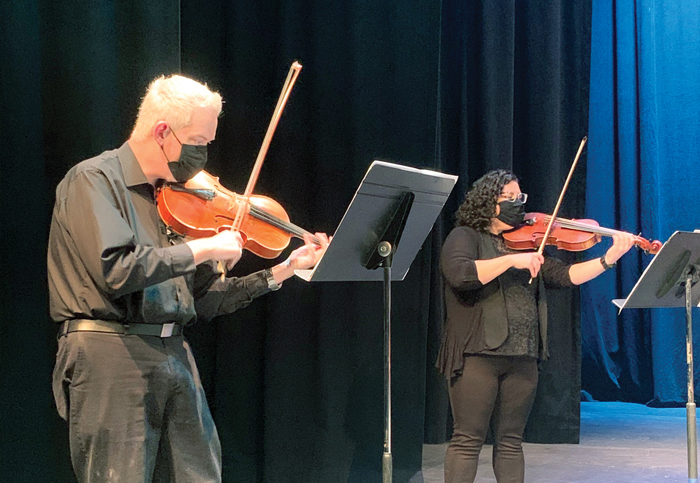 Submitted photo Salisbury Symphony principal violist Tim Gudger (left) and associate principal violist Kate Middel perform during the recording of the Playful Chamber Music show, which can be streamed on demand from April 5 to April 11. The show will feature works by Johann Sebastian Bach, John Cheetham and Scott Joplin.

SALISBURY — A year after the Salisbury Symphony was forced to cancel its remaining live performances when the pandemic arrived, musicians gathered on March 13 to record a second virtual concert for the 2020-21 season.

And as more people across the nation receive the COVID-19 vaccination, Salisbury Symphony leaders are optimistic about a gradual return to a normal and particularly special season.

Tickets are currently on sale at www.salisburysymphony.org/concerts-tickets for the Playful Chamber Music show, which can be streamed on demand from April 5 to April 11. It will feature many of the symphony’s principal players performing works by Johann Sebastian Bach, John Cheetham and Scott Joplin.

Months of studies and adjustments led to the success of pulling off a virtual concert. In June, University of Colorado Boulder led a study with major music organizations across the U.S. to determine how musicians, especially those playing wind instruments, could perform safely during the pandemic. Recommendations from that study suggested instruments with a straight path from the mouthpiece to the bell, such as clarinets and oboes, posed the greatest safety concern. By contrast, instruments with a curve, such as saxophones, did not as easily spread aerosol from performance since the bend in the instrument acts as a catch for droplets.

Salisbury Symphony heeded those recommendations, requiring the limited number of performers permitted at one time to wear masks and socially distance. Music Director David Hagy called the endeavor of wearing masks for wind instruments “an absolute nightmare.” Ultimately, masks were designed with a slip that allows the mouthpiece to be used, and bell covers can be fitted around the end of wind and brass instruments to prevent further spread.

Each season is typically filled with five concerts and two fundraising events. But the pandemic caused the symphony to cancel its two remaining concerts in 2020. However, it was still able to put on a virtual Pops at the Post performance, which featured performances from prior years in lieu of a new show.

Hagy said this year’s Pops at the Post concert, scheduled at this time to be in-person on Sept. 11, will be a special one as it will mark the 20th anniversary of 9/11 and the first major event at the Bell Tower Green Park. Hagy said the event will memorialize the victims of both 9/11 and COVID-19, and honor first responders and health care workers.

Until then, the symphony will perform three virtual shows. The first one was streamed during Valentine’s Day weekend and only included nine musicians. April’s show will include a total of 22 musicians, while a show scheduled for May will include 25 musicians. It’s possible, Hagy said, that the May show will allow for a handful of locals to view the recording session and provide some much needed and sorely missed applause.

Hagy added that everything that had been planned for last season and the current will eventually take place, including a show focused on works by Beethoven at Livingstone College.

Safrit said virtual performances allow those who purchase a ticket to stream the show as many times as they wish during the streaming period. Though turnout wasn’t at a level normal live performances spark, Safrit said he was pleasantly surprised to see that multiple households streamed the show more than once.

“We like to know they enjoyed the concert so much they wanted to listen again,” he said.

Just as music can provide a getaway for the local community, musicians see it as their getaway, too, Hagy said. Limited capacity limits prompted the creation of a relief fund for contracted musicians unable to perform in 2020. A total of $2,600 was raised and has since been distributed to those who indicated they needed the help. About $2,000 of it, however, was raised by other musicians who gave up some of their earnings to help the ones struggling, Hagy said.

Additionally, Safrit said a Paycheck Protection Program loan, its annual state grant and nearly $40,000 between the Rowan Arts Council and North Carolina Arts Council allowed the symphony to stay afloat and end the season without a deficit. As a nonprofit, the organization relies on philanthropy and grants to bring music to the community.

A normal performance can include up t0 70 musicians and cost up to $35,000 or $40,000. Safrit said virtual performances actually cost more to conduct due to the added cost of a production crew.

The pandemic also impacted the symphony’s educational program. Each year, both beginners and advanced string students can experience a week-long day-camp in the summer that ends with a free performance open to the public. Hagy anticipates being able to stream its summer camp in June, with a focus this year on beginners who were unable to perform last year.

Hagy said music is able to speak to everyone in some way. But music during the pandemic helps those “coping with the challenge of living.” The upcoming Playful Chambers Music performance, he said, reminded him that music can allow people to be distracted from the stress of it all.

“We need to be diverted from that whole thing,” he said of the pandemic. “We need people to see things as being fun … (Music) can take you away from the stress of dealing with all these issues.”

Hunter said the pandemic has allowed Salisbury Symphony to take a step back and evaluate any missed marks. One focus moving forward is accessibility, adding that the beauty of music is that it can be a social service to the local community.

“Music is at the core of everybody,” he said. “It’s enjoyed by everyone regardless of where you’re from. Orchestral music transverses across all cultures. We think it’s important that music be performed because of its ability to teach and inspire.”