High school football: Hornets can’t come all the way back 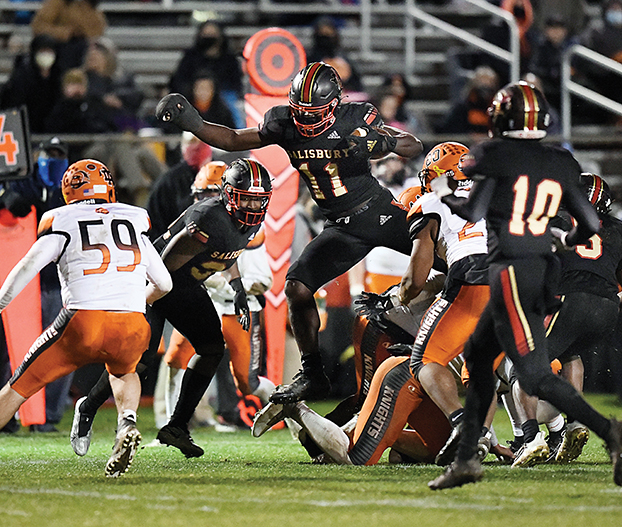 Salisbury's Jalon Walker rumbles for a first down on a 4th down play Friday during Salisbury's loss to North Davidson.

SALISBURY — The sight of Salisbury linebacker Jalon Walker warming up, massive wrap on his right hand to protect a figure injury, was intimidating for the guys on the other side of the field.

“Our guys were like, ‘Uh, oh, Jalon’s playing! Jalon’s playing!'” North Davidson head coach Brian Flynn said. “But I thought that he would. What I told our guys was that we would stick with the plan.”

Walker or no Walker, that first drive by the North Davidson Black Knights was without flaw and set the tone for all that followed in Friday’s pulsating 21-14 victory over the Hornets at Ludwig Stadium.

Quarterback Tedric Jenkins, who had already sunk Salisbury in this year’s Central Carolina Conference basketball showdown, directed that brutally efficient drive — 75 yards, 13 plays, 10 runs and three completions by Jenkins mixed in. There were no negative plays. No penalties. The offensive line was coming off the ball. Even Salisbury’s mighty defense, with Walker denying one side of the field, was knocked back and gave way.

“That first drive, just huge,” Flynn said. “We executed. Tedric Jenkins is such a perfectionist that he can be his own worst enemy. He’s a special talent, but I keep telling him he doesn’t have to be perfect. He’s got good teammates. Sometimes he just has to throw it up there and trust them make a play.”

Tanner Jordan got the first touchdown, burrowing in from the 1-yard line. The Hornets surged through to block the PAT, but it was 6-0.

It would get a lot worse before it started getting better for Salisbury (2-2, 1-2). The Hornets, 2AA runner-up in 2019, are out of the fight for first place now. Now, the goal is finding a way to make the playoffs, and even that won’t be easy.

Salisbury’s offense was provided by powerful running back JyMikaah Wells, who would carry 31 times for 124 yards. On the Hornets’ first possession, Wells got 9 yards on his first two totes. Third-and-1 seemed like a sure thing for Salisbury, but there wasn’t much mystery about what was coming next. Wells was swarmed for a loss by a horde of Black Knights.

“Wells is a load and believe me he was wearing down our defense in the second half,” Flynn said. “But the guy we game-planned for was (Salisbury quarterback) Vance Honeycutt. You watch Salisbury and he’s constantly creating big plays with his legs. Our defense did a great job tonight of containing Honeycutt. We were able to make him uncomfortable. We put a lot of pressure on him.”

It was still 6-0 when the Hornets experienced a disastrous two minutes early in the second quarter that put them in a 21-0 hole.

Jenkins was on target for two explosive pass plays — first for 26 yards, and then 28 yards to all-world receiver Jamarien Dalton for a touchdown. The Black Knights (3-1, 3-0) tacked on the 2-point conversion and led 14-0.

When Salisbury couldn’t move the ball, Jenkins struck again. His 33-yard dash, with a half-the-distance to the goal penalty tacked on for a late hit on the North Davidson sideline, put the ball inside the Salisbury 10. Jenkins got the touchdown himself, and now it was 21-0.

Wells was getting decent yards, 3 or 4 or 5 on every pop. That would have been fine progress for the Hornets, but inevitably a penalty would crush a potential drive.

There was one chance for a quick-strike touchdown, with a receiver running behind North Davidson’s defense, but Honeycutt’s on-the-move pass was under thrown. At the very least, it should have been a big play, but the pass was dropped.

And so it went for the Hornets before halftime.

“North Davidson is good and we were doing a lot to make them better,” Salisbury head coach Brian Hinson said. “Our offensive execution was just terrible. Lots of mistakes. We lacked focus. But defensively, after that bad stretch in the second quarter, we started to play much better. Our defensive line started playing really well.”

The tide actually started to turn before halftime. For the last seven minutes or so of the first half, Salisbury’s defense was starting to win the fierce struggle that was going on in the trenches.

Then Salisbury made a key adjustment at halftime, employing Walker as a free safety. That just about eliminated North Davidson’s passing game. Besides being big and very fast, Walker is versatile. He can play just anywhere. That’s one of the reasons the junior has been recruited by virtually every major college program. He plans to announce a college commitment next weekend.

“Putting me in the middle of the field, that meant they couldn’t just run away from the side I was on,” Walker said. “It gave me a chance to make plays that helped us get back in the game.”

Walker made the third-quarter play that turned momentum Salisbury’s way for good. It was a faked punt after another drive bogged down. It was fourth-and-7, but Walker suddenly had the ball and stampeded for 13 yards.

“I don’t think we executed all that well on the fake, but Jalon made a good play and broke tackles,” Hinson said.

That play led to a score. With 2:06 left in the third quarter, the Hornets finally got on the board. Honeycutt took it in from the 6. Wade Robins kicked the point, and it was 21-7. There was still time because Salisbury’s defensive line, which would record four sacks of Jenkins, was turning up the heat.

The Black Knights had a chance to salt the game away in the fourth quarter, but failed to do so. A fumble around the Salisbury 10, rolled around on the ground wildly and ended up in the hands of the guy North Davidson least wanted to see with the ball — Walker.

“The man with one hand somehow scooped it up and took off,” Hinson said.

The Black Knights protested that Walker was down when he picked the ball up, but officials disagreed. The play stood, and what a play it was. Walker ran amok, breaking tackles, sprinting, breaking more tackles. They finally stopped him at the North Davidson 10.

“We’ve got a chance to put the game away, to go up 28-7, and we didn’t,” Flynn said. “We’ve got to do better in that situation. Instead of putting it away, we gave Salisbury life.”

Wells put the ball in the end zone two plays after Walker’s mad dash, and it was 21-14 with 3:16 left on the scoreboard clock.

Salisbury still had a shot at that point, but the onside kick attempt failed. It looked promising when it began bouncing, but it went 9 yards, instead of the required 10.

North Davidson banged out one first down, the Hornets exhausted their timeouts, and then Jenkins was kneeling in triumph — in victory formation.

“We played a good second half, got the momentum turned our way with some big plays,” Walker said. “But you can’t spot North Davidson 21.”

That was the bottom line. North Davidson’s terrific first 15 minutes held up, even though the Hornets had the upper hand for the last 33.

Jenkins finished with modest stats — 105 passing yards and 50 net rushing yards — but the key stat for any QB is getting the win.

Honeycutt was 7-for-17 passing for 74 yards, with most of the completions going to Marcus Cook. With a couple of huge-loss sacks, the Black Knights held Honeycutt to 7 net rushing yards on 12 attempts.

The massive road victory means North Davidson should still be unbeaten in the league, barring amazing events, when it tangles with Oak Grove in Welcome on April 9, the final day of the regular season.

“We’re not going to relax against anyone that we play before then, but this win should get us in the playoffs,” Flynn said. “Just a huge win for our guys.”

Central Davidson is scheduled to play at Oak Grove on Monday.