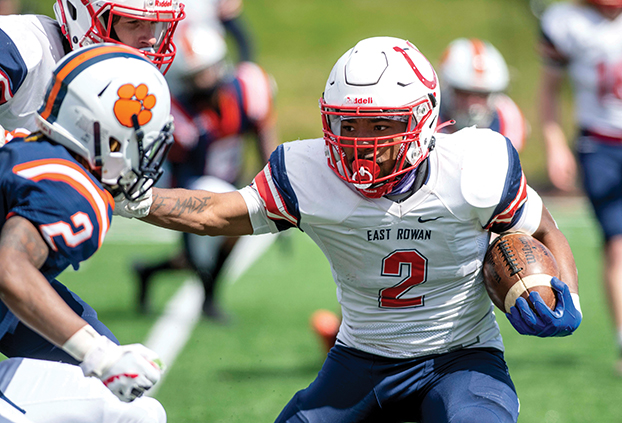 Winless in their first three games, the Mustangs needed a kick start in the worst way — and got it Saturday afternoon at Kannapolis Memorial Stadium. They prevailed when sophomore Cole Eagle’s 23-yard field goal with 11.2 seconds remaining decided a 43-40 NPC victory over favored Carson.

“Literally, it’s like a weight being lifted off our shoulders,” winning coach John Fitz said moments after East scored the game’s last 10 points and squared its conference record at 1-1. “I’ll tell you what was impressive about that last field goal. We had a bad snap and (holder) Isaac (Hinceman) was able to get the ball down. Then (Eagle) had enough presence of mind to hold up his timing before kicking the ball through. That was a two-man shot.” 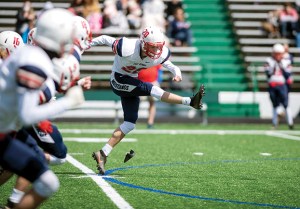 Jon C. Lakey / For the Salisbury Post -East Rowan’s Cole Eagle (20) kicks off. Eagle made the winning field goal at the end of Saturday’s game.

“We talked about it all week. They’re a good football team,” said Carson coach Daniel Crosby. “Their record didn’t indicate it, but they’d lost three close games. We knew we were in for a battle. Give them credit. They made one play more than we did.”

It was a dizzying game that saw seven different scoring plays in the opening quarter. A short touchdown blast by Carter Dowd and Alex London’s 12-yard TD pass to Brodie Johnson gave Carson (2-2, 1-1) a 33-19 lead late in the second period. East used Cam Padgett’s touchdown throw to Vincent Jones and Pinckney’s 52-yard sprint down the right side to tie the score 33-all entering the final stanza.

“It took time for us to get this thing together,” said Pinckney, who also scored on a 72-yard romp as the first quarter expired and a 4-yard burst midway through the fourth. “We didn’t want to go on an 0-4 streak so we did something about it. We got greedy.”

East locked the gates after London (152 yards passing, 78 rushing) hit running back CP Pyle with a screen out of the backfield early in the final period. Pyle shredded a couple of would-be tacklers and zig-zagged for a 52-yard touchdown, putting the Cougars back in front with 9:58 to play.

“It was just a matter of staying calm,” said Fitz. “Offensively, defensively, special teams — we just weren’t very good in the first half. At half time, we were able to calm down. I told them, ‘This is simple. We’ve got to go out there and make stops and we’ve got to gain yards on offense,’ which we knew we could do.”

They did it in a hurry, navigating 59 yards in five plays for the tying TD. Significant plays included Pinckney’s 21-yard gain into Carson territory and his 32-yard pickup to the 4. On first-and-goal, he skirted into the end zone behind 265-pound left tackle Victor Ponce to make it 40-40 with 7:35 remaining.

An interception by East freshman defensive back Logan Dyer — playing in his first varsity game — cleared a path to the game-winning score. Only 3:47 hung on the clock when the Mustangs began their final drive from their own 35. Working primarily out of wildcat formations, East routinely snapped the ball to Pinckney for solid gains.

“The counter was a good play for us today,” Fitz noted. “The counter requires patience. You can’t just fly up in there. Sammy seemed to have just the right amount of patience.”

He showed a flair for the dramatic when he completed an option-pass to tight end Dominick Dale, good for 23 yards and first down on the Carson 43. Two plays later, he busted a 19-yard run to the 20. Pinckney’s final carry moved the ball to the 1-yard line, where Padgett was smothered on a third-and-goal play. On fourth down, Hinceman and Eagle — along with the entire offensive line — executed a decisive field goal, low snap and all.

“I’m proud of my defensive guys because they made a stand down there and forced them to kick a field goal,” Crosby said afterward. “They fought their guts out.”

So did Carson’s offense. It collected 16 first downs and 318 yards total offense. But three costly turnovers and an inability to shackle Pinckney spelled the difference.

“Most important is it puts us in good position in the conference (standings),” Pinckney concluded. “We got what we wanted today.”