College football: Strong second half not enough for Indians 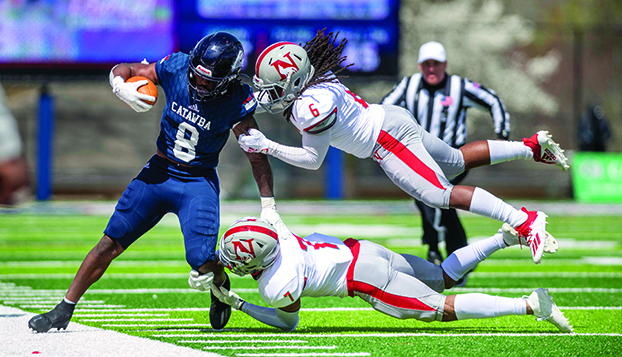 Jon C. Lakey / For the Salisbury Post- Catawba’s Nasjzae Bryant (8) runs out of bounds after a short run as Newberry’s Ja-Quez Smith (6) and David Vereen (7) tackle.

They weren’t just 1-yard sneaks. His 43-yard burst early in the third quarter gave the Indians the lift they needed to make a game of it, and his 50-yard dash down the Newberry sideline with 9:45 left to play gave the Indians a legitimate chance to win on the new Kirkland Field turf at Shuford Stadium.

“I ran around a little bit today,” said Avent, who is bigger, quicker and more confident than he was the last time he was leading Catawba’s offensive huddle. “I saw some holes and some young guys made some good blocks for me.”

The scout team QB when he was a true freshman, Avent became Catawba’s starter for the last six games of the 2018 season and directed three wins. One of those victories was a romp against Limestone in which he had three rushing TDs, but none of those scores were longer than 10 yards.

Avent’s devastating preseason injury on the cusp of the 2019 season was part of the reason for a Catawba nose-drive to a 1-10 record, but he’s returned to health and was given the starting nod on Saturday by head coach Curtis Walker over two other QBs who also have started games for the Indians.

Avent had his issues in the first half as the Indians dug an ugly 21-0 hole, but in the second half, he was every bit as dynamic as Newberry QB Dre Harris, who dominated the early action. Avent had 82 of his 121 passing yards and 107 of his 112 rushing yards after halftime.

Catawba’s youthful defense spent the first half watching Harris (190 passing yards) and Newberry’s tough back Mario Anderson (111 rushing yards) pinball off of them for huge plays.

Anderson’s 53-yard gallop set up a TD on the first possession by Newberry (2-1).

Harris’ 28-yard completion on a second-quarter play on which he was nearly sacked led to the TD that put the Wolves on top 14-0.

“We had some early jitters,” Avent said. “We hadn’t been out there in a game in a long time. It took us a while to settle in.”

Harris fired a 19-yard touchdown pass with 17 seconds left in the half to send Catawba to the break in a miserable mood and staring at a 21-0 deficit on the shiny new scoreboard.

“Newberry’s third game and our first, and they were more ready than we were at the start of it,” Walker said. “But we talked to our young men at halftime about being the best they could be, challenged them to compete. I thought we fought like crazy throughout the second half.”

When the second half opened, Avent hit Nazjae Bryant for 13 yards and extra-quick freshman Kujuan Pryor for 17. On first-and-10 from the Newberry 43, Avent came shooting through a gap and took it all the way.

“We just needed one play to give us a spark,” Avent said. “That got us started.”

After freshman Denaris Wardlow intercepted a tipped pass, Catawba put together a 37-yard push that sliced the deficit to 21-14. Avent got the TD from the 1 with 12:23 left in the game.

Then Catawba enjoyed an inspired defensive sequence with John Oxce and Joe Camara teaming to sack Harris. Then Luke Cerasi and Christian Campbell sacked Harris on the next play. On fourth-and-30, Newberry punted to midfield. Avent broke his long TD jaunt on the next snap, wheeling to his left and then motoring unscathed down the sideline. Clayton Crile’s PAT made it 21-all with 9:45 left.

Catawba had all the momentum in the world at that point, but could only move from the Catawba 13 to the Catawba 42 when it got the ball back and had chance to grab its first lead.

Crile boomed a punt 48 yards to the Newberry 10, but the Wolves, staring at a very long field, still made the plays to pull it out. They moved the ball efficiently, with Anderson busting gains of 16 and 21 and Harris completing a 49-yard pass. Anderson got the decisive TD from the 4 with just 11 seconds left in the game.

“Newberry made the plays at the end to win, but we took a lot of good steps in that second half,” Walker said. “Build, build, build. Every game, every practice, every workout, every weight lifting session, it all matters. We’ll get there.”

Catawba corner Jordan Gregg was in on 14 tackles, while Wardlow made seven.

Catawba plays at Wingate next Saturday.