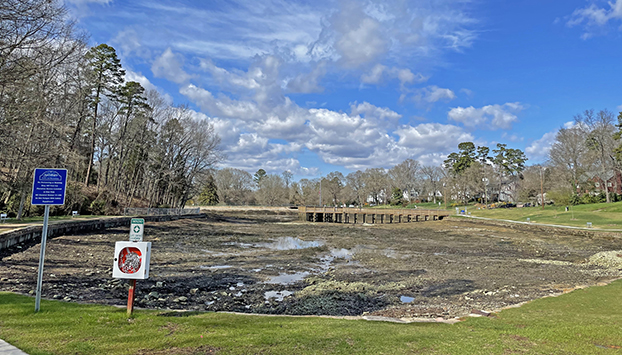 City Park Lake sits nearly empty after a leak in an abandoned pipe under the lake. Natalie Anderson / Salisbury Post

SALISBURY — The city next week plans to fill an abandoned sewer pipe that runs below City Park Lake to repair a leak that caused crews to drain the lake last week.

Parks and Recreation Director Nick Aceves and Public Works Assistant Director Chris Tester said on Wednesday staff noticed low water levels and suspected a leak from a sewer line that was present during construction of the lake in the late 1930s. The city then drained the lake, but it must wait for the water to become level with the pipe before the abandoned pipe can be plugged. Aceves anticipated it will take a day or two for the water to completely drain.

Tester said there was no prior knowledge that the old sewer line had not been filled. Workers on Monday will dig on both sides of the line and eventually fill the pipe with either concrete or expansion foam to “get into any nook and cranny that we can’t see,” he added. The cost of the repair is not known at this time because the city is considering two different contractors.

“We’re just trying to get it fixed as soon as possible,” Tester said.

He anticipates the lake could be refilled and available by the end of the week.

Though the draining likely killed some of the fish, Tester said most of the trout stocked in the lake by the North Carolina Wildlife Resources Commission has already been caught this year. Monday was eyed for the spring fish restock, but it will now be delayed. That stock will include grass carp to keep vegetation down, bream, bass and catfish.

Aceves said it’s also likely some fish will travel to deeper areas of the lake, away from the pipe, or stay in the creek that runs along the side of the park.

Wednesday’s leak comes just months after the lake endured a makeover as part of a $450,000 project spread across two budget cycles. In 2019, the lake was dredged and drainage entrances were added to prevent further buildup of sludge. Other improvements include the implementation of a 96-square-foot wooden pier that encompasses a deck in the center of the lake, along with the removal of invasive plants in the area above the lake.