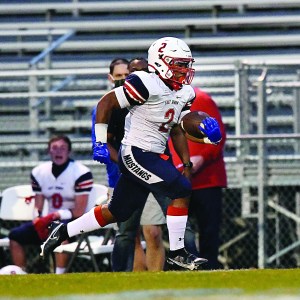 This one will be played on Saturday at noon at A.L. Brown, which has a turf field and a large stadium. Gates open at 11 a.m.

It goes without saying that despite the records, the Mustangs are dangerous.

East also controlled time of possession and owned a 14-0 lead before mistakes led to a 20-14 loss to Mount Pleasant.

East’s record-setting back Sammy Pinckney amassed 218 rushing yards against West and he’ll be the man the Cougars have to contain.

Pinckney rushed for 272 yards and five TDs in 2019 when the Mustangs pummeled Carson 53-30. East will hand it to Pinckney some, but he’ll also take direct snaps as a “Wildcat” QB. Sometimes he’ll line up as a receiver, which is scary for any DB.

Vincent Jones, who ran over Carson last season, is being used as  receiver and topped 100 receiving yards against West.

Carson pounded South Rowan, got in a 27-0 hole against Mount Pleasant before almost pulling that one out, and then smashed North Iredell 38-10 last week in a NPC opener.

Carson expected to be better offensively and defensively this season — and has been to this point.

Alex London has thrown for 546 yards and five TDs for the Cougars. CP Pyle has 201 rushing yards. Emory Taylor and Jake Harris have combined for 20 receptions.

East rushed for an insane 535 yards in the Carson game last year and will be eager to test Carson’s defensive improvement.

Carson leads the all-time series 8-6, but the Mustangs have won the last two.

North Davidson receiver Jamarien Dalton recently was named to the All-State basketball team and was voted CCC Player of the Year — and he’s even more highly regarded in football.

North Davidson edged the Hornets 24-21 in 2019, coming back from a 21-10 deficit. The Elon-bound Dalton caught two TD passes in that game from athletic lefty QB Tedric Jenkins, who also is still around.

Salisbury QB Vance Honeycutt did most of the damage for the Hornets in the 2019 meeting with the Black Knights. He threw TD passes to Marcus Cook and Jalon Walker and broke a 68-yard scoring run himself.

Salisbury picked up an easy 51-0 win against Lexington last week, but most weeks this season the Hornets are going to be taking on the best competition in the CCC. Salisbury has lost to Oak Grove, so this is just about a must-win  for the Hornets tonight.

Jalon Walker, considered one of the nation’s top linebacker prospects, is expected to be in action. Walker suffered a finger injury in the Oak Grove game.

JyMikaah Wells has six rushing touchdowns. Honeycutt has run for three TDs and thrown for four. He passed for 200 yards last week.

West grabbed a desperately needed 27-21 win in the league opener against East Rowan last week, so the Falcons are 1-0 where it really counts.

Noah Loeblein threw four TD passes against East, two of them to Andrew Kennerly, who took his first two receptions of the season to the house. Damon Phillippe had a TD catch last week and has been an excellent target. Tight end Ben Sweet got his first TD catch last week.

West’s running game still isn’t in high gear — a total of 308 rushing yards and one rushing TD in three games.

That could be important, as South Iredell appears vulnerable to the running attack. Statesville wore down the Vikings and rushed for 326 yards in beating them 27-10 last week.

South Iredell took a defensive struggle against Alexander Central opening night, but was overmatched by Reagan and lost 44-16 in Week 2.

West creamed South Iredell 41-6 in Mount Ulla with one of its best performances of the 2019 season. West did almost all of its damage in that one on the ground.

South Rowan gets to play at home for the second straight week.

The Raiders competed really well in a 36-24 loss to Thomasville last week, although penalties and defensive breakdowns prevented the Raiders from winning.

West Davidson lost a designated non-conference game to East Davidson, a team that South Rowan beat, so the Raiders are favorites tonight. They haven’t been in that position often in recent seasons.

South wasn’t bad against the run last week, but has to tighten up against the pass. Thomasville threw for 302 yards, including several game-swinging plays.

This is only the fourth meeting. South won the first two, but the Green Dragons thumped South 42-21 in 2019.

Chatham Central hasn’t played a game since it beat Albemarle 6-0 on Feb. 26, but hopefully the Bears will be able to play this one in Bear Creek.

Chatham Central has been hit hard by academic ineligibility for the second semester and subtracted 14 players. Roster numbers reportedly dropped from the low-40s to the mid-20s.

The standout for Chatham Central is the 6-foot-4 quarterback Michael Moore, who is being recruited by a number of schools. He also shines for the Bears in basketball and baseball.

North Rowan comes in looking to get back on track after a 43-0 loss to Hibriten.

Zay Davis has rushed for 262 yards and five TDs, although he was held to 63 yards on 15 carries by Hibriten.

Kyree Sims completed five passes against Hibriten for 48 yards. He has 274 passing yards for the season. Amari McArthur has seven catches for 102 yards.

North Rowan played Chatham Central in 2019 when it was badly depleted by injuries and set some records in a 72-3 romp over the Bears, who also took a 70-0 beating from North Stanly.

North Rowan has generally demolished Chatham Central. The Cavaliers are 7-0 all-time in the series. Victories of 49-6 and 55-0 preceded the 72-3 massacre.

The first-year West Cabarrus Wolverines lost respectably to Robinson and blanked Cox Mill, the team that took the Wonders to overtime last week.

West Cabarrus, which had last week’s game with Concord postponed, has been much better on defense than offense.

The Wonders, ranked 11th in 3A by MaxPreps, are putting up nice, balanced offensive numbers, rushing for almost 200 yards per game and throwing for 160.

Jamison Flowe has 278 rushing yards and five TDs, while Kam Cromah had his best passing game of the season last week with 277 yards.  He has five TD passes and three interceptions.

Defensively, the Wonders have given up a ton of passing yards — more than 200 every game — but they’ve handled the run.

West Cabarrus hasn’t thrown with much success, so it may not be an ideal matchup for the Wolverines.

Reagan is good, having lost by a touchdown to Mount Tabor (ranked fifth in 3A) before smashing South Iredell and beating highly regarded Glenn 31-19 in a CPC opener despite committing four turnovers.

Reagan is ranked 11th in 4A and did more damage running than passing last week against Glenn.

Davie, you probably have heard about. Junior back Tate Carney owns a ridiculous 16 TDs and broke the school single-game rushing record  with 327 yards in last week’s 62-43 win against RJ Reynolds, while putting the ball in the end zone eight times.

Ranked eighth in 4A, Davie also throws it very well — Alex Summers has two straight 200-yard passing games — so the offensive has been unstoppable.

Jack Reynolds has 20 catches for 334 yards and three TDs.

Defensively, the War Eagles allowed more than 500 yards and 43 points last week in the highest-scoring win in school history, but that’s life in the CPC where everyone seems to have lots of skill athletes.