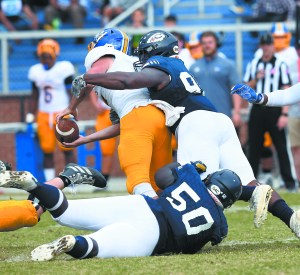 John Oxce (50) is on the action against Mars Hill. Photo by Wayne Hinshaw, for the Salisbury Post.

SALISBURY — Back in November 2019, the last time the Catawba Indians played a football game against an outside opponent, young Catawba defensive linemen John Oxce and Joe Camara displayed lots of talent, potential and energy, but they also showed they had things to learn.

“As a true freshman, you’re running all over the field and trying to make every tackle like you did in high school,” Catawba head coach Curtis Walker said. “But you learn a system. Oxce and Camara have learned a lot and now they’ve got some college experience to go along with their talent.”

There’s a difference physically, mentally and emotionally between being 19 years old as Oxce, a powerfully built Shrine Bowler, and Camara, a South Piedmont Conference Player of the Year, were the last time Catawba played — and being their current ages. Now Camara is 20.75, while Oxce is 20.5. Now they’re going to be expected to crush anything that comes near them and to confidently patrol their lanes and gaps when plays start away from them. They tasted a steady diet of adversity as true freshmen. As seasoned sophomores, they may be ready to excel.

The fall of 2019 was an injury-riddled nightmare for the Indians. After a while, they were starting eight true freshmen on defense and paid for that youth with a 49-3 home pummeling from Lenoir-Rhyne to cap all the misery. But Walker threw all those youngsters into the fire with a purpose. He did it with the idea that if it didn’t kill them it would make them stronger in the long run.

On Saturday, when Newberry visits the beautiful Kirkland Field turf at Shuford Stadium at 1 p.m., with the new scoreboard gleaming in the background, the Indians are going to find out how far along they are in the rebuilding process. It looks like a very long way back from 1-10, but good health and hard work can speed up a retooling process.

The Indians are ready to see how they stack up with the Wolves. Newberry already has beaten Tusculum and lost in overtime to Lenoir-Rhyne.

“Newberry has two games under their belts, but I know we’ve gotten in a lot of very good practices, and our guys are eager and they’re excited about the opportunity to compete,” Walker said. “This is an asterisk season, but we’ve been working for it since Feb. 22. It’s important. It’s important to the development of our young men, important to the development of our program. This is going to do more good for us than a normal spring season because we get to play outside opponents.”

No one really knows what to expect from the Indians, who have three experienced quarterbacks. Ken Avent III was the starter before a preseason injury knocked him out for all of 2019 and began a chain of catastrophic events. Kendall Davis, who replaced Avent, lasted half a season, before he went down. Kaylon Wade, who was a true freshman in 2019 and would have redshirted, finished up. They’ve all had their moments and they’ve all made big plays. If you’re a pessimist, Catawba has a difficult situation at QB. If you’re an optimist, Catawba has wonderful depth at QB. Walker is an optimist.

An injury wrecked the 2019 season for running back Nazjae Bryant, but now he’s back healthy. Freshman Dante Smith and redshirt freshman Daniel Parker are the other fast backs near the top of the depth chart, as Catawba tries to discover the next Kenyatta Greene.

Dcvonte Tanksley and freshman Kujuan Pryor are exciting young playmakers who stand out in a deep group of wide receivers.

Sophomore center Cameron Ivy-Young should be an offensive line anchor for several seasons to come.

Catawba’s best player is on the defensive side of the ball. Jeremiah Ferguson, a 220-pound All-SAC senior linebacker, is a tremendous tackler and leader.

Christian Bennett, a linebacker from East Rowan who endured the standard growing pains for a true freshman, has made exciting progress. He shined in the preseason and will be in Saturday’s starting lineup.

D’verik Daniel, another sophomore, might bcome the standout in the defensive secondary.

“He’s one of those bellcow type players,” Walker said.

Catawba’s roster is mostly freshmen and sophomores. This is a really young team.

More recruits from the Class of 2021 will be filing in behind them.

Walker is enthusiastic about a recent recruiting haul that was heavy on DBs, linebackers and offensive and defensive linemen. Catawba added a tight end as a January transfer and signed another one from the high school ranks. The Indians didn’t have an urgent need for quarterbacks, running backs or wideouts.

“We secured depth at the positions where we needed it most,” Walker said.

Catawba was delayed by storms and lightning strikes at Thursday’s late practice, but Walker still liked the work the Indians put in.

Catawba only has four games scheduled in this spring season, home against Newberry and Barton and road against Wingate and Lenoir-Rhyne, but Walker talks about a five-game season. That would include being part of the SAC championship game.

While Saturday’s game will be attended by a host of people associated with Catawba, including players’ families and season-ticket holders, COVID concerns still prevent ticket sales to the general public.

Fans, who can’t go, can follow the game via local radio, social media or streaming options.

“I’ve been satisfied with our level of execution in practice,” Walker said. “Now we’ll see how far we’ve come, as we put things in place for this fall.”