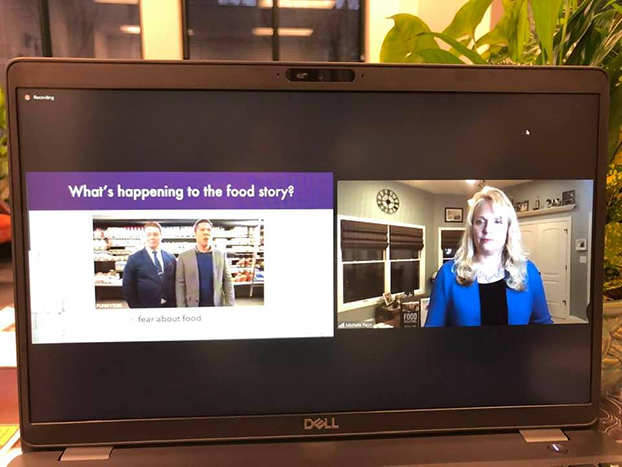 SALISBURY — Michele Payn provided food for thought during her presentation at the Rowan County Chamber of Commerce’s “Salute to Agri-Business” virtual Power in Partnership on Thursday morning.

The speaker, author and agricultural advocate spoke via Zoom from her home in Indiana about food bullying, which is the subject of the book she published in 2019 called “Food Bullying: How to Avoid Buying BS.”

“Food is a confusing business,” Payn said. “It’s a business that’s based in emotionalism unfortunately instead of evidence.”

Payn described the forces that shape the U.S. food system today, including the marketing and messaging of various products that sway both public opinion and what people buy at the grocery store.

Payn said that there are 40,000 products in a grocery store on average, each with a variety of claims such as non-GMO or certified organic. They are tagged to tell the consumer how products have been made, what is and isn’t in the food and why the customer should buy. With several claims on almost every item in the grocery, Payn said it’s understandable why a consumer would be confused.

“The reality is that all of this marketing and all of these mixed messages have increased the confusion, they’ve increased the emotionalism,” Payn said. “As the marketing gets bigger and the disinformation continues to grow, we have activists who have been bullying our farmers and others and consumers and we have a lot of food shaming, particularly during COVID-19.”

Payn said food shaming can even deter people of lower socioeconomic status from purchasing fruits and vegetables because they can’t afford organic produce.

The confusion created by food labels, Payn said, ends up hurting the people who are responsible for bringing much of that food to the grocery — farmers.

“When you start seeing people use terms like GMOs, like non-human-animals, those are phrases that were tapped by the activists. They were coined by them and they are meant to push groupthink and honestly it has a fairly negative impact on farmers,” Payn said.

In order to combat that distrust, Payne encouraged people to approach farmers with any questions they have about a label.

“If I could ask one thing of all of you that are not in agriculture today, the next time you purchase your food, think about the question that you have that creates confusion and find a farmer to talk to,” Payn said.

Instead of focusing on the different labels of food and what they mean, Payn said that people should applaud agriculture instead.

“You live in a county that’s incredibly agriculturally strong and diverse and my hope is that you will celebrate that today,” Payn said.

Celebrating farmers is exactly why the Rowan Chamber hosts the “Salute to Agri-Business” program every year. Farming is not as prevalent in Rowan County as it once was, but it’s still an impactful industry both in Rowan and throughout the state.

“Currently, the state’s agriculture is the No. 1 industry overall,” said Michelle Patterson, of Patterson Farm. “It’s a $92.7 billion industry and it employs about one-fifth of the North Carolina workforce.”

There are 925 farms covering 118,914 acres in Rowan County. The county ranks within the top 15 in the state for berry, fruit, nut, vegetable and melon production and is sixth in the state in dairy cattle. In 2018, the total cash receipts from Rowan County agriculture totaled $77.34 million.

With March 23 being National Agriculture Day, Patterson said that she hopes female farmers in the county will take a moment to celebrate their story by posting a picture of themselves on Twitter with the hashtag #rowancountywomeninag.

Even after National Agriculture Day passes, Patterson said she encourages people to appreciate the importance of agriculture.

“I’ve said this many items before, but it is so telling in our times that only 2% of our population is working to feed the other 98% and so we can’t think of agriculture as a relic in the past,” Patterson said. “Farmers today are trying to use all types of technology to innovate and grow more, produce more with less resources and less expense. Thank you farmers for all that you do.”

The “Salute to Agri-Business” event was sponsored by F&M Bank. The Rowan County Chamber of Commerce will host its next Power in Partnership event on April 15, which will serve as the organization’s 95th annual meeting and will be sponsored by Novant Health Rowan Medical Center.