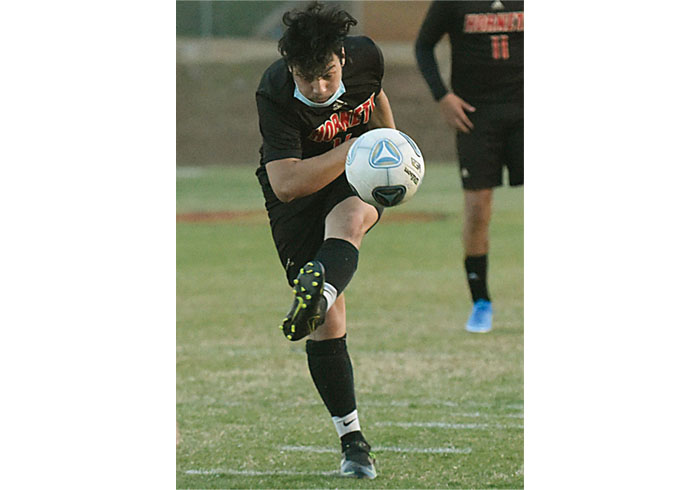 Wayne Hinshaw / for the Salisbury Post Salisbury’s Christopher Portillo takes a shot at the goal during a match against South on March 10.

DENVER — Salisbury’s boys soccer season ended on Thursday with a 4-1 loss to East Lincoln in the second round of the 2A state playoffs.

“Atrocious” was the adjective Salisbury head coach Matt Parrish used to describe field conditions. The Hornets weren’t able to warm up on the field.

Parrish said they got loose in area that was one third of an end zone.

“That goal gave them some mad confidence and it dampened our spirits considerably,” Parrish said. “It was a lot like the Oak Grove game. We had early adversity, we got down, and we never really recovered. East Lincoln controlled the action and set the pace. We made some uncharacteristic mistakes, and they made us pay for them. Several guys didn’t have their best night. Against a side like East Lincoln, we needed everyone to have a good night.”

The Hornets were down 2-0 when they got on the board.

Christopher Portillo scored on a header after a cross by Will Webb.

“About as beautiful a free kick as you’ll see,” Parrish said.

While the night was disappointing, the season wasn’t.

“COVID has been tough for everyone and there hasn’t been any normalcy for these players for more than a year now,” Parrish said. “But they did what they had to do for us to have a good season. They left their jobs to practice. They found rides where they could. They made it all work.”

It was a rebuilding year for the Hornets, who subtracted 14 players from the one that took the field in the fall of 2019.

But it’s a program. They put the pieces back together and earned the second seed in a challenging 10-team league.

Then they won a road playoff game at South Point on Tuesday.

“Under the circumstances, I couldn’t be prouder of what our guys accomplished this season,” Parrish said.

Parrish got back to Salisbury at about 10 p.m. on Thursday night.

Now he’ll guide the Salisbury girls team. The female Hornets will open Monday against a CATA squad that has scored 18 goals in its first two games.