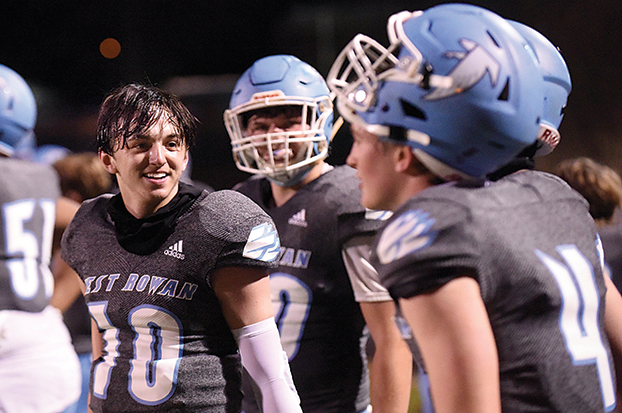 West was demolished the first two weeks by Salisbury and Davie County, strong teams to be sure, but 0-2 in Mount Ulla isn’t normal and isn’t fun.

“I can’t tell you how much we needed Friday’s victory, how much our guys needed it and our coaches needed it,” West’s first-year head coach Louis Kraft. “Now the monkey is off our backs.”

Kennerly has paid lots of dues in order to enjoy a night like he had in the 27-21 North Piedmont Conference victory against East Rowan.

He was an unlikely hero. He’s a baseball-first guy who spent his summer playing for the Rowan County NC3 team at Newman Park.

“He’s a great oufielder —  haven’t seen many guys track a ball in center field the way Andrew can,” Kraft said. “He catches everything. We all knew he planned to focus on baseball as a senior, but we were glad he decided to come out for football. We really needed wideouts. We only had one guy coming back (Damon Phillippe) who had ever caught a varsity pass.”

Most of Kennerly’s football background is throwing passes, not catching them.

The third of three athletic brothers, he spent his childhood tagging along after Aaron, the middle son in the Kennerly clan. Jordan is the older one. Jordan and Aaron played for South Rowan.

Aaron was on his way to a banner season in the fall of 2013 as South Rowan’s starting quarterback when he broke his collarbone in the Raiders’ sixth game. He returned in 2014, but suffered a shoulder injury in the second game that wrecked another season.

“Aaron was always my hero,” Andrew said. “I was the ball boy when he was playing, and I think that’s why I grew to love sports so much. Because of my older brothers, I grew up with sports. And not just the games. I was at every practice, soaking it all up.”

Andrew played on West Rowan jayvee football squads as a freshman and sophomore. As a sophomore, he alternated between quarterback and receiver with freshman Noah Loeblein.

When Loeblein emerged as West’s varsity starting quarterback as a sophomore in the fall of 2019, it was clear the Falcons wouldn’t be looking for another QB anytime soon.

Kennerly devoted himself to baseball as a junior and was in the starting lineup for the Falcons in the COVID-shortened spring of 2020 . He was off to a good start, running down flyballs and stealing bases.

“I changed a lot athletically my junior year due to the weight room,” Kennerly said. “I got a lot stronger and a lot faster.”

Kraft hoped Kennerly would provide depth at wideout, but then Kennerly changed his mind when he made an impact in West’s scrimmage against Robinson.

“Andrew catches a pass in that scrimmage and he goes to the house,” Kraft said. “That’s when we started thinking bigger.”

With Loeblein still with the basketball team in the playoffs and with jayvee QB Lucas Graham injured very early in the opener with Salisbury, Kennerly was forced into emergency QB duty. He spent most of that 36-0 nightmare fleeing for his life.

“Salisbury’s guys up front are really good,” Kennerly said. “I hadn’t had any QB reps to speak of, so I was just running around, trying to be an athlete, trying to make something positive happen.”

Loeblein returned for the Davie game in Week 2. Kennerly was thrilled to move back to wideout, although he had zero catches against the War Eagles.

On Friday, things started badly again for the Falcons against the Mustangs.

“We went three-and-out at the start, and then (Sammy) Pinckney goes 77 yards for East, and we’re down 6-0,” Kennerly said. “And we all knew this was a game we absolutely had to win. First home game. First conference game.”

Things started turning around when Kennerly caught a 29-yard touchdown pass from Loeblein in the opening seconds of the second quarter. It was a simple vertical route, but Kennerly sprinted well behind the defense, and Loeblein didn’t miss him. The PAT gave West a 7-6 lead.

“We’d run it a few  times already,” Kennerly said. “I was just a decoy and knew I wasn’t going to get the ball, but I’d been open every time. I told the coaches. I knew that play was there.”

Kennerly’s second TD, on the second of Loeblein’s four TD passes, was even more impressive. It came five minutes later with West still clinging to that 7-6 lead.

“It was on a fourth-down play from the East 36,” Kraft said. “It’s fourth-and-5 or fourth-and-6. Kennerly catches the ball 0ver the middle and it looks like he’s going to be short of the first-down marker. But then he’s got the first down. Then he’s pulling away from guys, and it’s a touchdown.”

West scored 21 points in the second quarter, its first serious offense success of the season.

Tight end Ben Sweet caught the third TD pass of the quarter. Phillippe got one in the fourth quarter.

West threw for 190 yards, after getting just 50 against Davie.

“Our offense kind of exploded in the second quarter, but there was a lot of great defense out there also,” Kennerly said. “We got a bunch of big stops. Everyone remembers the big plays. Sometimes the stops get overlooked. They shouldn’t.”

Kennerly made the last key play. He was the guy who fell on East’s onside kick after the Mustangs scored with a minute to go to pull within six.

“It was fitting that he made the game-clinching play,” Kraft said. “It was his night.”

Kennerly only caught two passes, but he put both in the end zone. That sort of production is hard to beat.

He and Loeblein have a solid connection, so he should catch a few more TDs before this season is over.

Besides playing center field, he projects to be West’s third pitcher behind Casey Gouge and Steven Smith.