Editorial: Will K-9 incident be like viral Rockwell case? 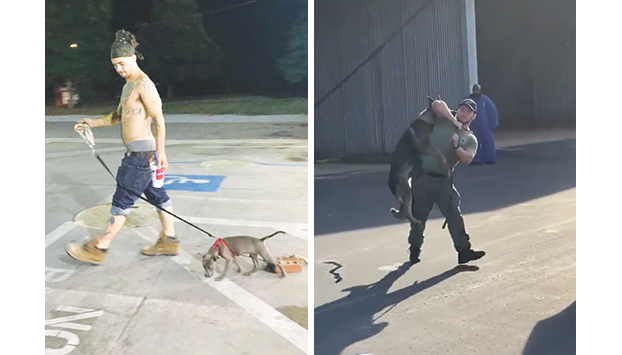 The image on the left went viral in 2019 and resulted in the man pictured being cited with misdemeanor animal cruelty. At right, is a screenshot from a video of the recent K-9 incident.

Lewis was pictured in a 2019 photo spread widely on Facebook walking a small dog through a Circle K parking lot in Rockwell.

Attached to the dog’s harness was a brick dragging behind. Lewis reportedly told police he was strength training the dog and wanted to make him look muscular. Law enforcement officers didn’t see it that way.

Because of the photo and a call to law enforcement officers from a citizen, charges were filed within a week of the viral photo. Lewis received a citation of misdemeanor animal cruelty. The public will now see whether a Salisbury police officer receives similar treatment in the case of K-9 officer Zuul, a 3-year-old male Dutch Shepherd.

Similar to Lewis, the Salisbury Police Department officer was shown in a video that went viral online after it was leaked to the media earlier this month. Also like Lewis, most members of the public see the police officer’s behavior as unacceptable. If the actions shown in the video are typical corrective measures police officers use to train dogs, a more wide-ranging conversation is in order. The dog was strung up by a leash, hauled to a car while hanging from the leash, slammed into a car and tossed into the vehicle before the officer struck Zuul. Making the matter worse, the incident apparently happened months ago, in October, and people during the video can be heard commenting about there being no witnesses and turning cameras off.

Because the incident happened months ago, the video’s leak appears to be the only reason city officials are taking action now. But it’s not clear who knew about the video and the incident before the leak.

Unlike Lewis, this case has entered its third week without a determination about the actions shown. It’s understandable an investigation into the police officer’s actions may take time to reach a final conclusion. If another law enforcement agency — the Sheriff’s Office, for example — determines a crime was committed while the officer was doing his job, it brings obvious ramifications for his employment. Mayor Karen Alexander provided the public with new information during Tuesday’s Salisbury City Council meeting: the city has apparently hired a third-party entity to assist.

Whatever the final result, the Salisbury Police Department must be transparent for the sake of public trust — something it has done before under Chief Jerry Stokes in major cases and those involving officer conduct.

The Salisbury City Council also should also consider releasing information necessary for public trust that it might have otherwise withheld.

Editorial: Make up as much ground as possible in…