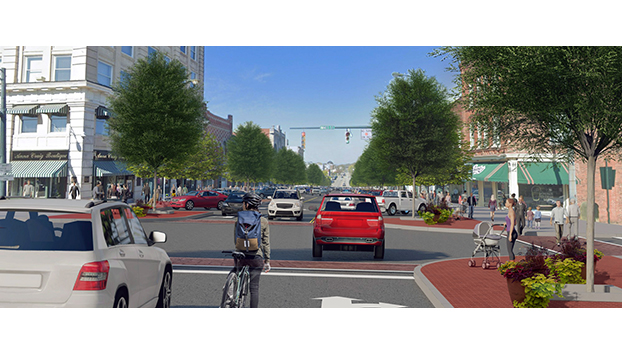 Submitted photo — A rendering from the city's long-term Downtown Main Street plan shows an example of how the downtown Square could look based on the recently approved concept plan that proposes replaced sidewalks and the addition of more street trees, trash and recycling bins, streetscape furniture, art, lighting and bike racks.

SALISBURY — City council members on Tuesday approved a revised version of a resurfacing and concept plan they believe encompasses local concerns and desires for a 10-block stretch of Main Street.

The initial draft of the Main Street Plan was presented to the Salisbury City Council at a December meeting by design and engineering firm McAdams, which was hired in 2019 to create plans. Since then, staff gathered public input from nearly a dozen virtual and in-person sessions and at least 40 one-on-one discussions with downtown stakeholders. A public hearing was held at the March 3 city council meeting.

The revised plan addresses some of the primary concerns raised by the community about parking availability, delivery areas and pedestrian and bicyclist safety.

The first part of the plan, which involves re-marking and resurfacing by the North Carolina Department of Transportation, is expected to be complete this summer. However, an exact date for construction is not known. The second phase includes a long-term vision for sidewalks and parking improvements to beautify the downtown area and make it more appealing for pedestrians. It will be funded by grants.

The plan includes left turn lanes throughout the entire corridor, with designated areas for bus stops and unloading zones. As one travels farther north in the corridor, parking will transition from diagonal on both sides to a combination of diagonal parking on one side and parallel parking on the other.

When NCDOT re-marks the area, the plan proposes reducing the total number of lanes from four to three and providing a center turn lane for left turns onto Innes Street from Main Street. Additionally, the plan changes parking from the current shallow 30-degree-angle to 45 degrees, which is currently in place next to the Bell Tower Green Park along North Church Street.

Each block would have a yellow arrow for left turns, but protected left turns in the form of green arrows”would be used in the Square to maximize pedestrian safety. 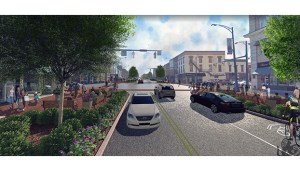 City Engineering Director Wendy Brindle on Tuesday presented council members with some tweaks to the re-striping plan. The revisions include bike lanes beginning at West Harrison Street and moving north to West Horah Street. Between West Horah and Kerr streets, “sharrows” would be implemented, which allow bicyclists to share the road with vehicles. Those sharrows will be shifted to the left to hug the inner part of the lane to protect from vehicles pulling out of parking spaces along the sidewalk.

The plan also places a bus stop on Bank Street, removes a loading zone on Fisher Street and adds another handicap parking space at the intersection of North Main and Council streets.

In an email, Stitchin’ Post Gifts owner Pam Coffield, who has expressed opposition to the plan, repeated earlier concerns about the three-lane model and cited safety concerns with delivery trucks using the middle lane for deliveries.

The revised plan adds a loading zone near the corner of Innes and Main streets, adjacent to Stitchin’ Post Gifts.

To address concerns from Koco Java owner Arturo Therecka about issues with vehicles turning into the drive-thru during peak hours, council member David Post suggested city staff eliminate the first three parking spaces near the entrance because vehicles pulling out of the drive-thru often make a left turn from Koco Java, which prevents new customers from entering.

Brindle said she is awaiting a construction schedule from NCDOT, but added that any additional necessary tweaks can be made before NCDOT begins resurfacing.

The second phase, which will be dependent upon available grants, proposes sidewalk “bump-outs” at intersections and mid-block locations. It also includes replacing sidewalks and the addition of more street trees, trash and recycling bins, streetscape furniture, art, lighting and bike racks.

Though the phase two items are long-term projects and will likely be implemented in intervals, urban design planner Alyssa Nelson said adopting the plan allows staff to have a base model as it seeks funding opportunities. She added the open application period for a federal BUILD grant begins in April.

“(This) is really just to keep pursuing what the plan could look like and not what we presented as being the end-all,” Nelson said.

Staff also clarified the overall plan adds more parking spaces downtown. In the 100 block of South Main Street, for example, Brindle said there will be 50 regular parking spaces and one handicap space. The concept plan adds an additional parking space downtown as well.

“As I’ve said before, I’m in favor of this plan,” council member Brian Miller said. “I think it’s the right thing to do. The adjustments we’ve made have improved it. Local knowledge usually trumps out-of-town knowledge for how these roads are used.”

• City planner Candace Edwards invited locals to weigh in on the use of 2021-22 Community Development Block Grant funds and HOME Program funds. The city is expected during the 2021-22 fiscal year to receive more than $416,000 in CDBG and HOME program funds from the U.S. Department of Housing and Urban Development, with a total of $441,510 available for use. Funding is designated for neighborhood improvements and revitalization along with public service funding for low-to-moderate-income families.

Public services applications are due April 9, and can be obtained at salisburync.gov/Government/Community-Planning-Services/Grants-and-Incentives/Community-Development-Block-Grant. Applicants can also call 704-638-5324 for additional information. The proposed budget and action plan for the funds will be presented to city council at the April 20 meeting.

• Council members extended the expiration of open seats on various boards and commissions from March 31 to April 30. Following concern from Mayor Pro Tem Al Heggins regarding a lack of diversity among board members currently, council members appointed some and tabled other appointments at the March 3 meeting and are allowing more time for a more diverse applicant pool. Applications can be located at salisburync.gov/Government/City-Council/Boards-and-Commissions.

• Council members awarded a contract in the amount of $37,000 to Elliott Davis, PLLC, for auditing services for the 2020-21 fiscal year. The firm has performed financial audits for the last five fiscal years, and has proposed a two-year contract extension, with $38,000 expected for the 2021-22 fiscal year audit.

• Members approved a request from the Public Works Department to declare a 2006 Morbark Tub Grinder as surplus and auction the equipment for at least $30,000.

• Members appropriated $32,850 in additional ABC revenue to the 2020-21 general fund. The city has received three of four distributions of ABC revenue, with the final projection to be a total of $50,000-$60,000 over budget. City staff are proposing to use the proceeds for engineering projects and needs that have not yet been budgeted, such as a $40,000 Emergency Vehicle Pre-emption at Fire Station 6 on Cedar Springs Road. Members also  appropriated $23,019 in insurance claims revenue to the 2020-21 general fund.