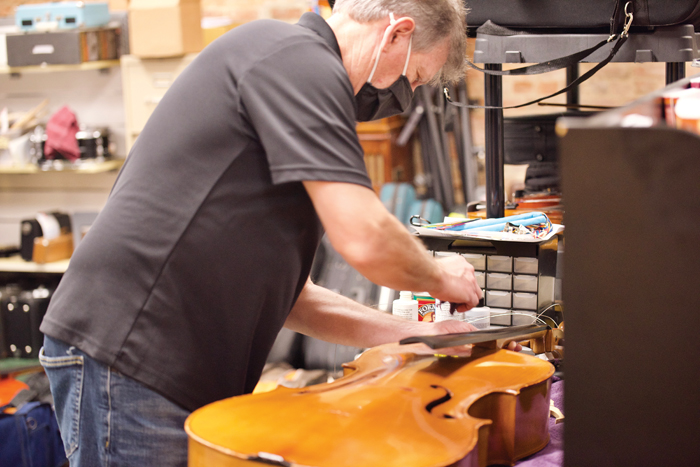 Carl Blankenship/Salisbury Post - Keith Howe repairing a cello that is part of a fleet of instruments the shop purchased for its rental program.

SPENCER — The Band Attic is the kind of music store that is essential to local music programs at schools.

Co-owner Keith Howe said much of the business in music retail has migrated to online sales, which the store participates in as well.

Howe spent most of his career as a public school band director, including leading the programs at the East Rowan and North Rowan high schools. Currently, he runs the store’s two locations and serves as part-time band director at North Hills Christian School.

The last couple year he was teaching full time, Howe said, parents talked to him about looking for estimates on instruments for their children or churches and repair work.

“As these stores began to close, it became more complicated,” Howe said. “And of course people were looking online, the online thing was becoming more popular, but you didn’t know what you were looking at.” 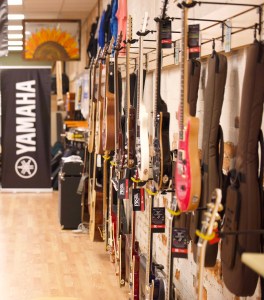 Howe and his sons, Tyler and Andrew, got an LLC for the company in 2012 and opened in the back of a local antique shop to test the water, performing repairs and selling supplies. It did well, and in 2013 the store moved into its own space. The Spencer location has been in its current storefront on Salisbury Avenue for three years, and the business expanded to a location in Granite Falls as well.

The difference between buying from a store like The Band Attic and a solely online retailer is the level of service and attention. You can buy an instrument from the store and get it repaired there. Howe said the store also makes sure its instruments are ready for sale.

Local music stores that offer broad repair services are crucial to high-volume customers such as schools as well. If a director drops off a sousaphone, the band might march with in a competition the next day; the shop can get it fixed in time. The rental program is also an affordable way for families to get instruments for their students to use in class.

Marching bands in particular put their equipment through a lot of duress, carrying equipment on the field, moving it on and off trailers and constantly exposing it to the elements at outdoor games and competitions.

Since the store opened, Howe said, it has taken on much of the service work for local schools. He said it services most of the schools in Rowan County and captures business from schools in surrounding counties as well because it is the closest shop for many of them.

The Music Mart, a longtime music store that went out of business, gave equipment to Howe when it closed. He still has a cash register from the store.

“That was a great store,” Howe said. “Even when I was in Rock Hill, our band program did business up here with the Salisbury store.”

The family knows brick-and-mortar retail is a difficult business these days, but Howe said they decided to be fearless and keep going.

Despite the COVID-19 pandemic, last year was the store’s best, and it is ahead of where it was this time last year as well.

The Howes expected business to be slow, but they’ve barely been able to keep instruments in stock. Guitars, drum kits, keyboards and ukuleles have all been selling like hotcakes. That’s due partially to a desire to find new hobbies during the pandemic.

“From the ukuleles side, a lot of parents bought them,” Tyler said. “It’s something for the kids to do. I had several parents buy themselves one as well so they could teach their child along with them.”

The popularity of guitar sales picked up as well. Contrary to what Tyler was expecting, the store sold several higher-end guitars and has picked up return customers. While interviewing for this story, Tyler was restringing a PRS guitar for a customer who recently purchased a second guitar from the store.

While sales have been up, however, school rentals have been down. Tyler is hoping business from schools will pick back up as the pandemic wanes.