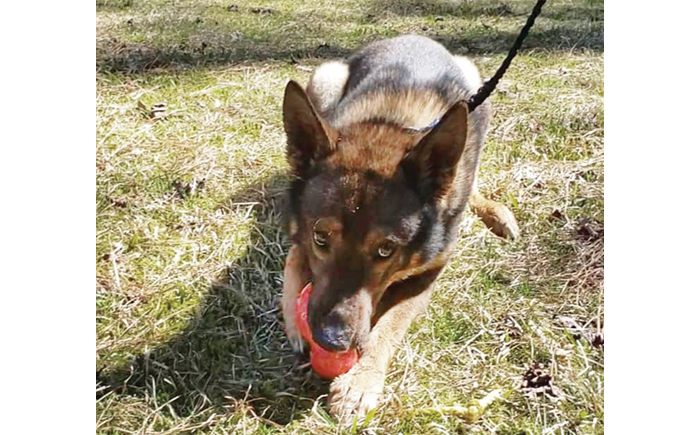 SALISBURY — Local residents and representatives of an advocacy group on Tuesday condemned the Salisbury Police Department and expressed distrust in the institution as a result of leaked video footage showing mistreatment of a Salisbury Police K-9.

The video, which has made national headlines and been widely seen on social media, shows a SPD K-9 handler aggressively lifting 4-year-old German shepherd named Zuul off the ground by his collar and pulling the animal onto his back during a training exercise. With the animal hanging off the ground, the officer slammed the dog on the side of a police vehicle, lifted him into the car by his collar and struck him with his hand.

Two representatives of People for the Ethical Treatment of Animals during a City Council meeting Tuesday condemned the actions depicted in the video and called on the officer and all those involved to be terminated and charged and for a third-party to conduct a fair and thorough investigation. Rachel Bellis of PETA asked why the SPD has been able to “sweep this under the rug.”

PETA member and Salisbury resident Jeff Hege said dogs are deserving of love and are loyal. He said Chief Jerry Stokes “has attempted to excuse this behavior.”

Local resident Margaret Lee questioned why nothing was done before the “horrible criminal attack,” when the footage was taken and where the investigation currently stands.

Local resident Heather Sweat said the video shows everything anyone needs to know about the department’s operations and that she can’t understand how anything depicted in the video can be debated. If it’s proper training, she asked, then why were off-camera voices heard saying, “We’re good, no witnesses?” Not taking action will show “cops are allowed to do whatever they want, when they want,” she added.

“If the officers do this and it’s swept under a rug, how do the citizens of Rowan County have trust? We cannot trust our Salisbury Police Department if these things continue to go on as well as others,” said local resident Jan Misenheimer. “As for our chief, there is no trust in our chief.”

Nina Dix, who trains therapy dogs and operates and boarding business in Salisbury, said Zuul’s veterinarian assessment showed no physical damage, but her concern is the psychological damage from the incident, which could have a long-term effect on his behavior to and interaction with other humans. She said such actions depicted in the video could very likely lead to a loss of trust in humans.

Dix, who also was instrumental in fundraising money for a dog wing at the animal shelter, added that many German shepherds and similar breeds are chosen for police work due to their courage and loyalty. Dix said she’d like to tell Zuul “good boy” for restraining himself from an otherwise defensive move that could have resulted in the officer “losing half of his face.”

Zuul’s eagerness to work and please was evident in the video, Dix added.

Meghan Ketterman, who said she works with those struggling with substance abuse disorder and victims of violence, recalled an incident weeks ago where SPD allegedly refused to provide services to a woman who Ketterman said was in a “dangerous situation.” She said the department noted the woman’s past history of substance abuse. Ketterman said the woman told her she didn’t feel safe with the SPD.

The abuser, who was armed, Ketterman said, was eventually arrested after several visits to the woman’s residence and after the woman was allegedly strangled.

“The community is having a distrust in the police,” Ketterman said. “The people I work with are afraid to call the police for they don’t feel like they’re going to be heard or treated well.”

Ketterman criticized the department for having a domestic violence advocate on staff only Monday-Friday from 9 a.m. to 5 p.m. She said officers should be better trained to handle domestic violence cases and calls related to mental health issues and all interactions with the public “so issues with domestic violence and the dog” can stop happening.

Following the public comments, Mayor Pro Tem Al Heggins said she wanted the public to feel as if they’ve been heard. Heggins requested the city attorney and/or city manager inform the public of when to expect a decision on the issue, but city attorney Graham Corriher said that information could not be disclosed.

Heggins then requested the council receive a weekly update on the matter.

“I just believe this information is necessary and essential because our council has to be clear in our discharge to the city manager and the city attorney that we will not tolerate in our city services any element that erodes public confidence and trust,” Heggins said. “What the nation has seen and heard in the video presents as the mistreatment of a K-9 officer, and the words used by officers imply that we can do what we want as long as the public does not see us. This has indeed eroded public confidence and trust.”

Mayor Karen Alexander told Heggins that she was “confusing the public” by requesting more information be released.

“There’s a due process that must occur for any of our employees, and we cannot change that. That is North Carolina law,” Alexander said. “(The) attorney, who has a law degree, has advised us as a council that we can’t release anymore information at this time, nor in the future, if it is related to a personnel matter. I don’t know how much clearer that our communication department could be. And anything that you’re asking for is basically a confusing tactic. And I don’t know where you’re trying to go with it.”

Heggins responded that there was “no tactic here at all.”

Heggins argued that she wasn’t confusing the public by adding to the information that’s already out there. She cited North Carolina General Statute 160A-168 (c) (7), which states that the city manager and city council members may inform the public of an employee’s promotion, demotion, suspension or other disciplinary action, reinstatement, transfer or termination and the reasons for that personnel action if first “determined in writing that the release is essential to maintaining public confidence in the administration of city services or to maintaining the level and quality of city services.”

Corriher suggested the extent of information that can be released be discussed in the closed session following the regular meeting.

Council members went into a closed session for a little more than an hour to discuss personnel issues and consult with an attorney. No formal action was taken before adjournment. Alexander said the council will continue to gather more information and release to the public any information that can be disclosed legally.