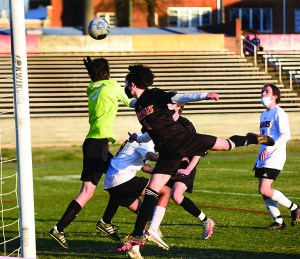 With 18 minutes left on Tuesday, Clark scored on a line-drive header through traffic to give the Hornets a 2-0 lead at South Point. That goal allowed Salisbury to hold on 2-1 in the first round of the 2A state playoffs.

Will Webb made the cross into the box that set up Clark’s goal.

“Bennett was at exactly the right place at exactly the right time,” Salisbury head coach Matt Parrish said. “I was thrilled for him. We’ve got some guys — Dennis Anaya, Webb, Colin Donaldson — who deservedly get a lot of attention, but Bennett has been an unsung hero. He comes off the bench, but he plays starter minutes. He can play four or five positions. He never complains and works his tail off in every drill and every match. He is a tremendous teammate, a great guy. He deserves all the praise I can give.”

After several ties, Salisbury (9-1-3) wasn’t a sure thing to make the playoffs as recently as last week. The Hornets were in fourth place in a 10-team Central Carolina Conference that would send the top three to the playoffs.

After beating fourth-seeded South Point (11-4), the Southwestern Conference co-champs, the Hornets are in the second round.

Salisbury battled the elements as well as South Point on Tuesday. The teams scrapped through a scoreless opening half.

“Continuous rain and horrible field conditions,” Parrish said. “But we surged to multiple scoring opportunities in the opening 20 minutes, only to fail to find the back of the net. There were several slips and falls, the ball wouldn’t roll consistently, and both teams struggled to find prolonged consistency for the first 40 minutes. But then our halftime was the best of the season. Everyone was incredibly positive and confident. I honestly feel like that in many capacities they underestimated us. Their side was eerily quiet, the players, the sidelines, even the stands. Our kids recognized it and built on it.”

South Point came out firing in the opening moments of the second half, maintaining possession and creating opportunities.

But Salisbury capitalized on its first solid possession.  Christopher Portillo found Anaya, who chipped the goalkeeper to give SHS a 1-0 lead.

“Just a huge goal because it quelled their momentum and solidified our confidence,” Parrish said.

The score remained 1-0 until there were 18 minutes left in the match. That’s when Webb connected with Clark to make it 2-0.

South Point fought until the very end and scored with five minutes remaining to provide the final score.

Christopher Portillo and Carlos Henriquez were outstanding in the midfield and played heavy minutes. Outside backs Riley Dillon and Yahir Aviles played as well as they have all season.

“Those seconds seemed to tick away in slow motion and the last 12 minutes felt like an hour,” Parrish said. “But we’re in the second round, and I hope Bennett Clark remembers that goal forever.”