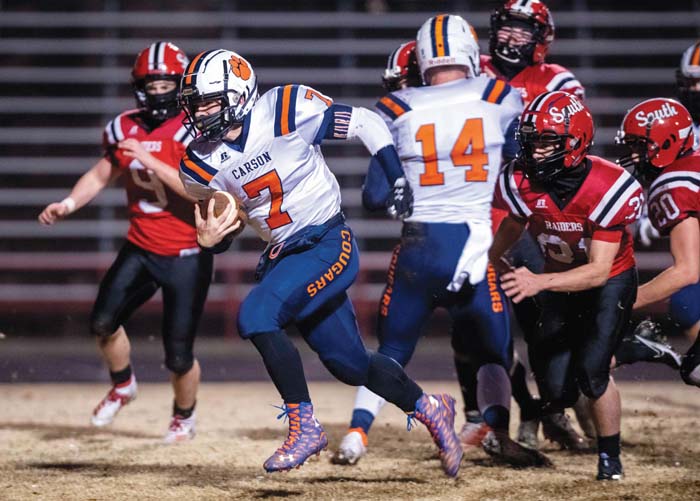 “Rolled to the right, Emory was wide open, and I threw the ball into the dirt,” London said. “It didn’t affect us winning the game, but that play ate at me the rest of the night.”

Friday at North Iredell, was an instant replay. It was a chance for a mulligan, a do-over.

London dropped back. Then he rolled right. Taylor came free on the crossing route, just the way he was supposed to do on the chalkboard. This time London hit the quick sophomore in stride for an explosive play that took the ball inside the North Iredell 5-yard line and set up a touchdown.

That play was a snapshot of London’s steps forward. In his last two outings, he’s played the best two games of his varsity career. He threw for a career-best 190 yards in the 27-21 loss to Mount Pleasant. Then he topped that with 211 passing yards and two more TDs at North Iredell.

Carson’s 2019 season, Crosby’s first at the helm, was mostly an injury-deflating, 2-9 struggle for the Cougars. London was the starting quarterback as a junior, but his season included a concussion and 11 interceptions. He had three TD passes opening night against South Rowan, but only five after that.

“We didn’t throw it a lot and that made it tough to run the ball because teams were stacking the box on us and we were running into some bad numbers,” Crosby said. “We knew coming into this season we wanted to throw it more, knew that we had to throw it more. Starting in July, we starting doing everything the protocols allowed us to to do to improve our passing game. Then we threw the ball around all fall.”

London threw for 900 yards in all of 2019. Three games into this short season, he’s thrown for 546. That’s serious improvement.

Most of the throws have been short or intermediate, but he’s completed 44 of 66 passing attempts. That’s a 67% completion rate. He was 13-for-16 on Friday.

“The biggest difference for me was all the time we had to prepare,” London said. “It’s been almost a year and a half since our last season. That gave us time to get used to Coach Crosby and for him to get used to us. The plan was definitely to throw it more this year, to be more balanced. If you can throw it, then you can also run it. We’ve got good receivers. We still have Jake Harris, and we’ve got new guys that are doing a great job.”

Taylor has 11 catches for 183 yards. Harris has nine catches for 135 yards and two TDs. CP Pyle, who turned a screen pass into a TD on Friday, has 10 catches for 104 yards to go along with his 201 rushing yards. Weston Lee had five catches against Mount Pleasant. Jordan Garland has four rushing TDs.

“We’ve been well-balanced,” Crosby said. “We saw good things at North Iredell Friday. There were times when they made it very hard for us to run the ball, but we were able to make plays in the passing game.”

Crosby described London as not a great runner, but a good one. He has 82 rushing yards and one TD.

“He’s not going to do anything flashy,” Crosby said. “But he’s leading us to wins. He’s got our offense clicking. He’s been a dream guy to coach. He just shows up for everything all year long and gives you his best.”

London and defensive end Andrew Rollins were voted captains prior to the season.

“That meant a lot,” London said. “It meant I had earned the trust of my teammates.”

London’s father, Stephen, is a long-time middle school coach and assistant high school coach in Rowan County, so Alex has played the sport from an early age. He’s 5-foot-10, 175 pounds, so he’s known for a while that his final days of taking snaps and throwing passes would be in high school. He’s fine with that. He’s an excellent student and is headed to N.C. State to study civil engineering.

“It’s never been part of my thought process to play football past high school,” London said. “Football has always been something I did for fun. I enjoy playing with my friends, and 10 or 11 of them have been teammates since we were at Southeast Middle School. If you go play in college, football becomes a full-time job. I never wanted that.”

Carson plays a big home game Friday. Big for a lot of reasons. East Rowan is a rival, in the neighborhood, in the county and in the conference. For another, East wiped out the Cougars 53-30 in 2019 when they were 1-0 in the NPC. That loss sent them into a tailspin from which they never recovered.

“East games are always tough, but we enjoy the challenge,” London said. “We know those guys just like we know the South Rowan guys.”

Back in the summer, London didn’t know if he’d ever be on a football field again.

So he’s grateful for the way things have turned out. He’s getting a mulligan, a do-over for all the things that went wrong in 2019.

Hitting those crossing routes and making big plays happen, those things are nice.

But just playing this season is the thing that matters most.

For seniors who are wrapping up their football careers —  and that’s most of them —  that’s a win that will last a lifetime.