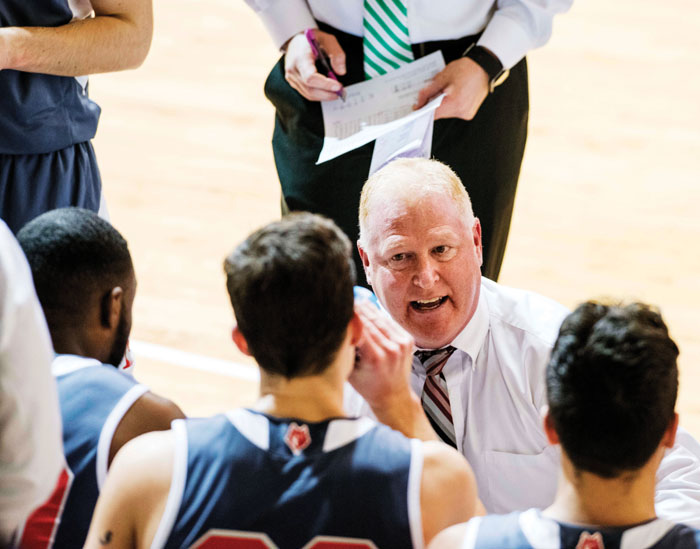 The most successful head coach in the history of Pfeiffer men’s basketball will take his first trip this week to the biggest college basketball tournament in the country.

Dave Davis, who coached the Falcons for 14 seasons, has been the associate head coach for the Winthrop Eagles for two seasons under
head coach Pat Kelsey.

In two seasons since December 2019, the Eagles are 43-4 overall, having won two regular-season and Big South tournament titles with two appearances in the D-I tournament.

“It has been an incredible run in my two seasons at Winthrop,” Davis said. “I have been incredibly blessed to be a part of this group of
coaches and players.”

Regarding Kelsey, Davis said his leadership “through this pandemic, with social and political unrest and the complete overhaul of the
normal college student’s life, has been beyond amazing.”

Winthrop dominated the conference this season, finishing 23-1 overall, including three wins in the Big South tournament by an average of 25.7 points per game. Taking on a Campbell team who had won nine straight heading into the tourney finals, Winthrop won 80-53, shooting 79% from the field in the second half.

“You could just feel in the locker room before the game an inner peace as our guys were so locked in,” Davis said.

The Eagles are the No. 12 seed in the South Region and will take on No. 5 Villanova in the Eagles’ first round game. The team is already
in Indianapolis, ready to play at one of the four venues.

Regarding the matchup, Davis said Villanova head coach Jay Wright “is one of the best, if not the best. We will need to be prepared, but we came to win and (are) thrilled with the 12 seed.”

The No. 12 seed for the Eagles is one of the highest seeds in the history of the Big South Conference.

Last year’s cancellation of the tournament because of the pandemic denied Davis the chance to coach in it, but Davis said being in
Indianapolis “is a dream come true. (It’s been) an amazing journey with a lot of adversity to get here, but our guys used last year’s
cancellation as fuel the whole year to get back and have the opportunity to play on this natural stage.”

Pfeiffer’s teams in the Davis era were known for their high-octane offense. In the 2009-10 season, Pfeiffer led D-II in points per
game (103.1) and was the highest scoring team in either D-I or D-II five seasons. The Falcons once scored 146 points in a win over Barton
in 2010 and still have the record for the most second-half points ever scored against the University of North Carolina Tar Heels (66).

Prior to going to Winthrop, Davis also was the head coach for nine seasons at Newberry College. Davis had seven straight winning seasons for the Wolves, while the team ranked in the Top 10 in scoring in the nation all nine years.