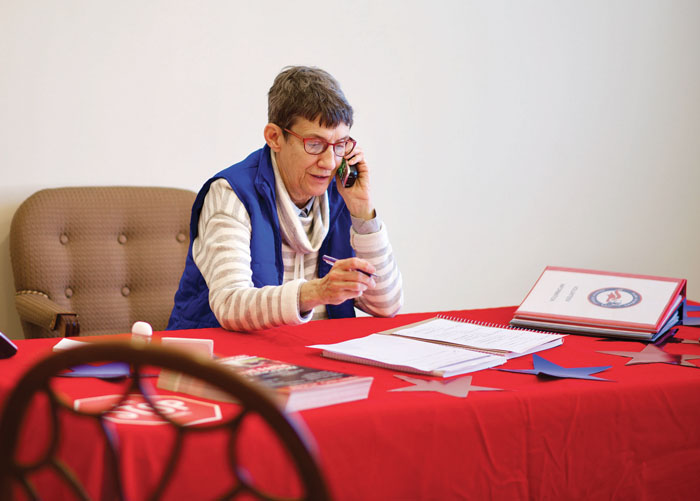 Carl Blankenship/Salisbury Post - Gloria Wilhelm on the phone with an interested parent at Faith Academy's office on Main Street.

FAITH — Faith Academy on Saturday held a lottery to select its first round of students.

The school sent 500 messages to hopeful families whose children were selected. Anyone who was not selected in the lottery was added to the wait list and also notified.

More than 700 people applied. Families who received seats at the school have five days to request an application and 10 days to complete it before forfeiting their seat. Families on the wait list are notified as a seats become available for students.

The open enrollment period ended Feb. 28. Students who applied after that date were added to the school’s wait list, too.

Academy Board Chair George Wilhelm said there were a few slots left open to allow siblings to attend the K-7 school together.

People who are on the wait list and do not get to enroll this school year can sign up again next year. There will be a new lottery for available seats at that point. Though, students who are already enrolled will be able to return.

The school will have at least one exceptional children teacher, but Hensley said the school may need two depending on the final makeup of students all the applications are submitted.

Hensley said kindergarten and sixth grade have more teachers because they mark beginning points for students either entering school for the first time or moving on to middle school. It is easier for families to start students off at a school than to transfer them after attending elsewhere.

Hensley said she is spending at least an hour with every candidate she interviews, not including second interviews. The teaching positions have drawn interest from a variety of teachers. She said people are applying from traditional public schools, charter schools and other districts. New teachers who are about to graduate from college or went back to school to earn certification are applying as well.

For Wilhelm, getting through the lottery process felt like an “aha” moment as the school gets closer to the reality of opening this fall and casts aside any doubts it could bring in 500 students its first year.

For students who did not make it in during the lottery or have not applied yet, they can still get on the wait list.

Plans for a facility are still a bit up in the air. The academy is prepared to place mobile units on a piece of Shiloh Reformed Church property for its first year, and the church has agreed to let it use the property, but it has also placed an offer on the Faith Elementary School property.

Faith Elementary will close permanently in June. The property has an appraised value of about $2.5 million, but about $4.2 million in capital needs the district has identified, albeit the facility is still suitable for holding classes.

The academy initially placed a $250,000 offer on the property, but rescinded it do it could move ahead with the plan for mobile units while the RSS board was still awaiting the results of an appraisal.

After RSS moved to advertise the property, the academy placed an offer for $100,000.