SALISBURY — A veterinarian assessment of Salisbury Police K-9 Zuul from early March shows there was no obvious musculoskeletal or neurologic damage following “an incident that involved his neck in October.”

The incident is depicted in leaked video footage of a Salisbury Police officer pulling up a K-9 by a leash and over his shoulder, slamming the animal into a car and striking him. A veterinarian assessment obtained by the Post through a public records request occurred months later — March 4 — at Concord Animal Hospital. The officer depicted in the video, whose identity hasn’t been confirmed by the city of Salisbury or police, also was separated from the animal after the video leaked.

The March 4th assessment appears to be the only one conducted since the October incident. In its records request, the Post asked for all assessments and bills of health conducted by a veterinarian for Zuul. Four documents were provided — three with June 2020 dates from Lazy 5 Vets and one from the Concord Parkway Animal Hospital from March.

During the assessment at Concord Parkway Animal Hospital in March, a veterinarian said Zuul was bright and alert, active and unwilling to hold still. Zuul reportedly did not show any “clinical signs” following “an incident that involved his neck in October 2020.” The report stated that there was “no discomfort on the flexion and extension of his neck, or lateral movement to the right and left.” Additionally, both eyes appeared normal, and there was no pain reported with Zuul’s hips and shoulders. The report indicated normal tracking when walking straight and circling to either side. There were no obvious, abnormal lung sounds. 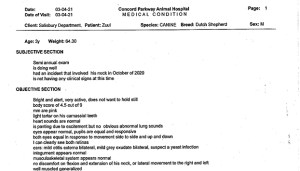 The above image shows the top section of a veterinary checkup for Zuul, a police dog who was involved in an incident in October 2020. Click on the image to view the full, recent assessment for Zuul.

The report gave Zuul a body score of 4.5 out of 9, which falls within the range of an ideal weight. His assessment also showed normal functions of his heart, lungs and eyes.

“I do not see any reason that Zuul should not be trained for police work,” the report concluded.

In March, Zuul was diagnosed with a suspected case of allergic otitis externa, a condition that causes inflammation of the external ear canal. He was prescribed Zymox HC. His caretakers were instructed to apply it to both ears. It was recommended that he receive routine heartworm prevention, home dental care, regular exercise, stimulation away from the usual environment and a healthy diet.

The previous assessment at Lazy 5 Vets on June 27, 2020, indicated it sometimes seemed hard for Zuul to breathe, but that his lungs sounded normal. The vet stated in the report that the dog’s shock collar was “slightly too tight” and contributed to his harsher breathing. The collar was loosened.

The June 27 assessment also shows Zuul had a reaction to one of his vaccines that included swelling of the face, skin hives and vomiting multiple times within a few hours. It was suggested those symptoms be treated with Benadryl if they persisted.

In June, Zuul reportedly weighed 70 pounds, with a body score of 4. In the more recent assessment, Zuul weighed 64 pounds.

Across the Pond Bed and Breakfast welcomes guests after…