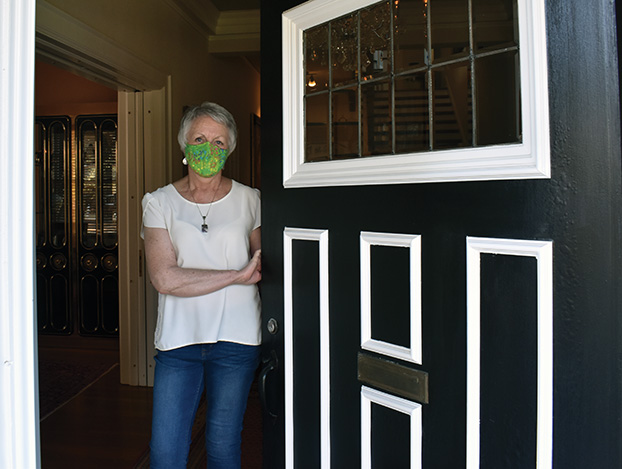 After a year without guests, Mary and Andrew Walker are once again welcoming tavelers to Across the Pond Bed and Breakfast. Ben Stansell/Salisbury Post

SALISBURY — For the previous year, things have been unusually quiet around Across the Pond Bed and Breakfast.

Since opening the inn seven years ago, Andrew and Mary Walker have hosted hundreds of guests in their historic home at 324 N. Fulton St. The husband and wife, who now call Salisbury home but are native to England, were used to spending their mornings getting to know travelers over a cup of coffee.

“That was difficult because March and April are some of our busiest months of the year and we had lots of bookings,” Andrew said. “We told the people in the next two weeks we wouldn’t be open and we would have to give refunds but hopefully we’d open shortly thereafter. It’s been 12 months. We’ve had to go and refund a lot of people.”

A year later, Andrew and Mary Walker are finally welcoming guests back to Across the Pond Bed and Breakfast. For the rest of March, the Walkers are only taking reservations over the phone, but plan to reopen online booking in April.

With both business and vacation travel reduced to a minimum during the pandemic, times have been challenging for the entire hospitality sector. It’s been no different for Across the Pond. However, some the obstacles the Walkers have dealt with have been uniquely taxing.

Unlike traditional hotels that employ dozens of workers, or even larger bed and breakfast operations, Andrew and Mary are the only staff at Across the Pond. That’s made it difficult for them to receive any aid from the local, state or federal program, such as the Paycheck Protection Program.

The only aid that Across the Pond has received, Andrew said, was a $2,000 grant from the Small Business Administration last April.

The Walkers didn’t benefit from Rowan County’s small business grant program either because they weren’t in operation at the time the program was accepting applications, which was one of the qualifications.

Without much government support, the Walkers feel as if they’ve “slipped through the cracks.” They’ve turned to their own savings to prop up the bed and breakfast.

“From a financial point of view, it’s been very difficult,” Andrew said. “We’ve had no revenue, but you can only offset a small amount of the overall cost. In these 12 months, the business has literally lost tens of thousands of dollars. We’ve had to subsidize that from our own savings, which we managed to do, but it was getting more and more difficult.” 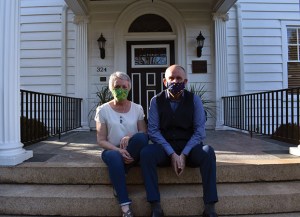 Without much government aid, Mary and Andrew Walker have kept their bed and breakfast in business with their own savings. Ben Stansell/Salisbury Post

As the Walkers have faced their own struggles, they’ve kept an eye on their similarly affected compatriots in the bed and breakfast industry.

“I’ve not looked at the numbers, but I’m sure a lot of bed and breakfasts actually went out of business because they’re not part of a hotel chain with large reserves of cash,” Andrew said. “I’m sure a lot of them didn’t make it because I’m not sure if they got any state or local help, because people were asking about that a lot.”

It’s been a difficult time financially for the Walkers, but they’ve also missed the daily interactions they’d grown used to while playing host for the past seven years.

“We’ve always liked to cook and we like meeting new people. It’s been a good fit for us and it’s been enjoyable,” Mary said. “We’ve missed the guests very much.”

The Walkers have tried to keep themselves busy by taking long walks outside or by completing a few renovation projects, including a traumatizing attempt to install peel and stick wallpaper in the home’s laundry room.

“It turned into quite a project because we’d never used it before and it’s OK if you’re putting it on a flat wall that doesn’t have any protuberances or anything like that,” Mary said.

The wall of the laundry room, however, was far from flat.

“It almost destroyed our 40-year marriage,” Andrew joked. “But besides that, it was an enlightening experience.”

After receiving their second doses of the COVID-19 vaccine several weeks ago, the Walkers decided that they felt safe enough to once again welcome travelers into their home, albeit with added precautions in place like mandatory mask-wearing. With guests now returning, the Walkers will once again be busy playing host. Although now, there will be even more cleaning and less socializing.

“We do interact a lot with our guests and answer questions about local attractions and about the area, especially if they’re looking for a job or thinking about moving to the area,” Mary said. “We’re cutting back on that for the time being.”

Mary said that they’ll hopefully increase their interactions with guests as time goes on. Now that they are taking reservations again, they won’t be short on customers.

“We have been getting a lot of calls though,” Mary said. “In the last month, we’ve had calls even before we were safe to open, with people looking for a room that same night. People are out and moving around a bit more now.”

More information about Across the Pond Bed and Breakfast can be found online at acrossthepondbandb.com.