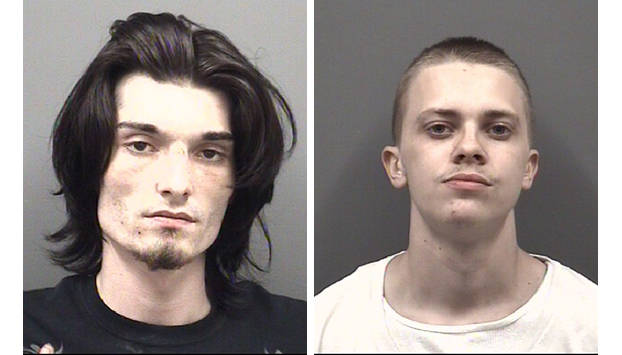 KANNAPOLIS — Two men face a bevy of charges in connection with car break-ins and larcenies on Friday night.

Kannapolis men Kyllian Obrien, 21, and Grayson Jacob Huffstetler, 21, were both arrested by the Rowan County Sheriff’s Office for their alleged roles in more than a dozen crimes in area of Longbriar Drive in Kannapolis.

Obrien and Huffstetler were both arrested on 10 charges of felony breaking and entering a motor vehicle, five misdemeanor charges of larceny, a misdemeanor count of injury to personal property and one count of felony attempted larceny.

The duo allegedly broke into a number of cars, including a Dodge Durango, Chevrolet Silverado, a Mercury Sable, a Chevrolet Suburban, a GMC Sierra and two Chevrolet vans. Huffstetler and Obrien allegedly stole a number of items from those vehicles, including a tackle box, softball glove, bluetooth speakers and Christmas lights. The report stated the two also attempted to steal a Honda Fourtrax ATV during their string of heists.

In total, the two allegedly stole or attempted to steal more than $4,682 worth of property.

Huffstetler was also arrested for felony possession of a schedule two controlled substance and Obrien was arrested for misdemeanor resisting a public officer for allegedly hiding behind a mattress in a bedroom while the officer was attempting to investigate the vehicular larcenies.