Planners put organizational skills to use, help with vaccine distribution 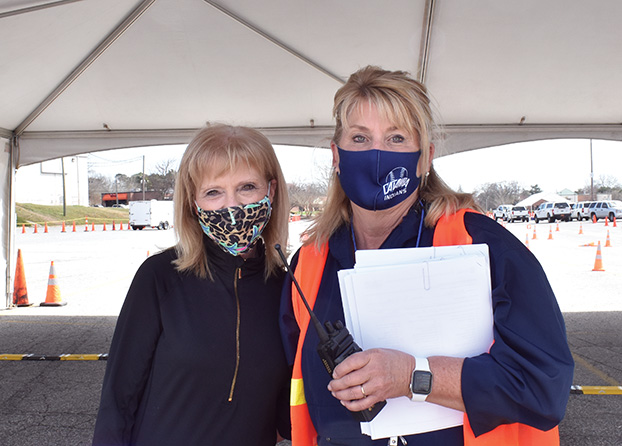 Shari Graham and Hen Henderlite are used to planning festive events, but the duo was called on to use their organization skills to help the Health Department make its vaccine clinics more efficient. Ben Stansell/Salisbury Post

SALISBURY — It all started with a joke on Facebook.

Several months ago, a friend of Shari Graham and Hen Hederlite tagged the two in a post that poked fun at their profession — event and party planning. The facetious post insinuated that planners whose schedules were freed up by COVID-19 should be called on to lead the vaccine distribution effort.

Graham laughed at the post and didn’t think much of it. That was until she received a call a few days later. On the other end was Dari Caldwell, who is chair of the Rowan County Board of Health. Caldwell’s message: “Be careful what you wish for.”

Caldwell was calling to recruit Graham and Henderlite to scout out the Rowan County Health Department’s vaccination clinics at West End Plaza to see if they could identify ways to make the drive-thru events more efficient.

At the time, the Health Department was still figuring out the most effective way to inject doses of the vaccine into as many arms as possible. The county wasn’t yet using an appointment model, leading to lines of cars clogging traffic on Statesville Boulevard and wait times that stretched on for hours.

Graham went to observe the clinics and dispatched Henderlite, her “mole,” to check out a clinic in a neighboring county while getting her own vaccine. Even though Graham and Henderlite have no personal healthcare experience or expertise, the duo quickly realized that they could help improve the logistical aspects of the clinics.

“The first thing we did once we started talking about it together was to get it down on paper,” Henderlite said. “We had to see what the needs were, how it could be improved and how to make it work.”

Graham and Henderlite met with Health Department and Emergency Management Services leaders and pitched some of their ideas. Not long after, Graham was officially brought on as the Health Department’s volunteer coordinator.

The duo found that helping organize a vaccination clinic wasn’t much different than planning for the ‘Tis the Season Spectacular drive-thru parade, a “reverse-parade” they orchestrated in downtown Salisbury during the holiday season.

“We got several hundred cars through in a couple hours, so it’s kind of the same thing,” Graham said. “There’s still a check-in spot, and technology is the same because you’re making a (online) reservation.”

Instead of providing a jolt of holiday spirit, Graham and Henderlite are helping protect people from the pandemic. The two have joked they could’ve hosted a parade and a vaccine clinic in one night if vaccines were ready in November.

Most of Graham and Henderlite’s suggestions for improving the clinics involved eliminating small inefficiencies.

“We picked up a lot of things that were just logistics,” Graham said. “It was a lot of making it easier for these workers who are out here all the time and making it more efficient.”

Graham said changes were about tweaking “little things,” including switching from handwriting COVID-19 vaccine inventory numbers to using pre-made stickers. Those changes along with more and more practice have led to wait times as short as 15 minutes.

“We recognize that there may have been different experiences we had when this started,” said Alyssa Harris, interim health director. “You’re looking at that change and shift and we have had to call people and ask them to come back for their second dose. They’ve said ‘Ah, I don’t want to wait in that line.’ There’s not much of a line for you to wait in anymore, so please come back.”

Graham and Henderlite have also relied on their extensive contact lists to rally volunteers.

“(Graham) is a very well-connected person, so having someone go out into the different civic organizations, who has really great outreach with Catawba and has that big picture for Rowan County has been extremely helpful,” Harris said.

Local civic organizations, Catawba College students and other community groups have lent their time and effort to help out with clinics. Graham said it’s been “inspiring” to see the community come together.

The duo has helped plan countless events in their careers, but none have felt as momentous as helping with vaccine distribution.

“Hen and I do a lot of events, but this is the most rewarding thing I’ve ever done,” Graham said.

For Henderlite, who still works part-time for the school system, the best part about helping with clinics is seeing the expressions of those who have received their second doses.

“This cloud is starting to lift and you see it in their faces,” Henderlite said.

Graham and Henderlite believe that they’ve helped the vaccine clinics become faster, but they give credit to the staff members and volunteers who have been working clinics day in and day out.

“I’ve met some amazing women and men,” Graham said. “They stand out here for hours and don’t give up. No matter if it’s raining or snowing or icy, they’ve done it all.”